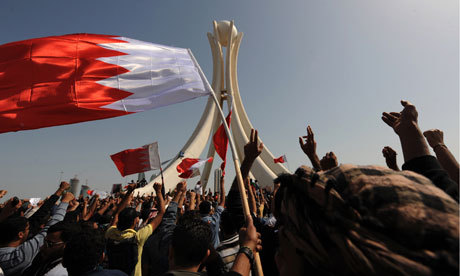 Bahraini Crown Prince Salman bin Hamad al-Khalifa on Friday called on for dialogue with the mainly Shiite Muslim opposition in the Sunni-dominated country, urging them to condemn violence.

"We had our own experience of the so-called Arab Spring last year. It divided the nation, and many wounds are still to be healed," the prince told delegates at the annual Manama Dialogue organized by the International Institute of Strategic Studies.

Bahrain, home to the U.S. Fifth Fleet and strategically situated across the Gulf from Shiite Iran, has experienced unrest since February 2011, when Arab Spring-style protests led by the Shiite majority erupted.

Hundreds of people were arrested when security forces aided by troops from neighboring Saudi Arabia crushed the uprising within a month.

The International Federation for Human Rights says 80 people have died in Bahrain since the unrest began.

Salman, considered to be a moderate within the ruling dynasty, spoke after thousands of Shiites in a village near the capital demanded the premier's ouster in the first officially sanctioned protest since a ban at the end of October, witnesses said.

"Get out, Khalifa!" they chanted, referring to Sheikh Khalifa bin Salman al-Khalifa, an uncle of King Hamad, who was held the premiership since 1974.

"We don't want an appointed government; we want a prime minister who serves the people," Sheikh Ali Salman, head of the main Shiite opposition grouping al-Wefaq, told the crowd.

The gathering was the first to be officially allowed since the end of October when the authorities banned all protests to ensure "security is maintained."

Salman said that security is not the only guarantor of stability, and that "dialogue is the only way forward."

He said he was not the crown prince of a Sunni or a Shiite Bahrain, but of the kingdom of Bahrain.

But he said "opposition leaders must condemn violence on the streets. Silence is not an option," while insisting that "political groups must be reconciled."

The opposition is demanding that the premier come from the parliamentary majority, and not be appointed from among al-Khalifa ranks.

An international panel commissioned by King Hamad found that excessive force and torture had been used against protesters and detainees in last year's clampdown.