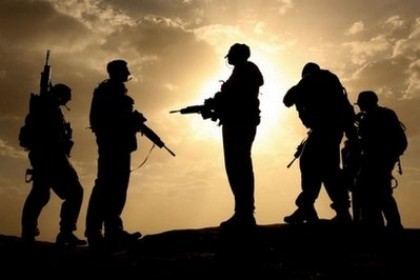 There was no indication that the attack was connected with defense chief Leon Panetta's visit, a U.S. spokesman said.

"I can confirm that insurgents detonated a vehicle-borne improvised explosive device in the vicinity of Kandahar airfield.

"Currently ISAF officials are on the scene collecting facts and assessing the situation and as information becomes available we will release it as appropriate," the spokesman said.

"I have no information at this time that this incident was associated with the visit of the secretary of defense. The attack occurred after the secretary returned to Kabul."

Taliban insurgents claimed responsibility for the attack in an sms message to AFP, but did not link it to Panetta's visit.

Panetta was due to hold a press conference with Afghan President Hamid Karzai later Thursday.

"As a result of this suicide attack two civilians have been killed, and 15 civilians and four ISAF soldiers have been injured."

A spokesman for NATO's International Security Assistance Force confirmed the attack, without giving details of any ISAF casualties. It is ISAF policy not to disclose the number of its personnel wounded in any attack.

Both assaults came as the summer fighting season should be drawing to a close, indicating that the insurgency remains resilient after surviving the biggest onslaught U.S.-led forces will throw against them.

The last of the extra 33,000 soldiers President Barack Obama deployed in a "surge" nearly three years ago left in September, and the vast majority of the remaining NATO force of more than 100,000 will follow by the end of 2014.

Reporters traveling with Panetta were briefed by senior officers at Kandahar who told them security was steadily improving in the Kandahar region and that the Taliban had been seriously weakened.

The head of U.S.-led forces in the area, Major General Robert Abrams, said the Taliban's capabilities were now "pretty limited".

But he said ISAF had detected "numerous" plots to attack Kandahar airfield that had been disrupted.

The biggest attack on a coalition base this year came in September, when insurgents stormed Camp Bastion in the south, destroying six fighter aircraft in the largest single loss of air assets for the United States since the Vietnam War.