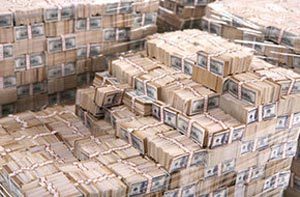 Several investors in the southern city of Tyre have reportedly become victims of embezzlement, radio Voice of Lebanon said on Thursday.

"Saleh Basma and Chawqy Arab pretended to be businessmen and cheated their victims into depositing $8 million,” VDL explained, adding that the depositors thought their money will be invested.

The two thieves have reportedly fled the country around a week ago.

Ezzedine, who allegedly had ties with Hizbullah, has squandered more than one billion dollars (688 million euros) of his clients' money, mainly Shiites from southern Lebanon.

Hizbullah leader Sayyed Hassan Nasrallah insisted at the time that Ezzedine is not linked to the group but acknowledged that some party officials had invested money with him.

Question is, where did they go? Put their pictures up so we can identify them if we see them . . . This of us who live abroad

fithy filthy militia screwing their own

actually, these people worked with lebanese and not with your filthy genocidal zionist militia.

they have to get money from somewhere - Iran is having economic meltdown right now!

now these are guys interpol should look for. Not Saad.

the filthy zionist scum trash and filth, pretending to be lebanese, is giving orders to interpol.

yes always...you can't get rid of our patriotic resistance...no matter how much trash you spill over here

Are you mentally retarded jabel? Or do you just feel like repeating the same thing over and over again as if that wouldnt make you insane

yeah right mowaten, hezbollah is a clean organisation that is not involved in drugs, killing, dirty money, and kidnapping....rrrrright! :)

...Ezzedine, who allegedly had ties with Hizbullah...

+ the fneish scandal/filth + all other holy war scandals...are always, somehow, linked to hizbala...Soon, their end (militarily AND politically) is certain...

the filthy zionist is happy, while deep inside he is crying because he know his version of "truth" is totaly false

The Hizballa scum keep robbing their our Shia community...hang up that turban ya nousrala and wear a $2000 like the Mafioso that you are...

Every argument has to turn into a m8 vs. M14. Well on behalf of anyone else who believes that both parties should be jailed or sent back to thier owners, i say put out an international search warrant for this guy and get our southern countrymen their money back.