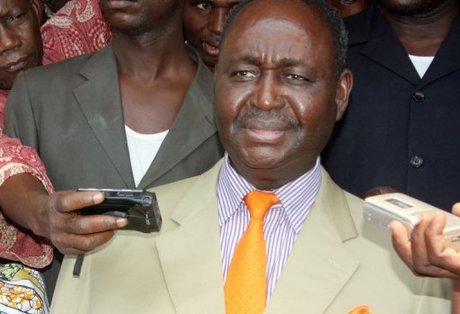 The U.N. is evacuating staff from the Central African Republic and the U.S. has warned its citizens to leave as rebel fighters close in on the tense capital Bangui.

France also deployed troops to protect its embassy after it was attacked by demonstrators calling for the former colonial power to help push back the rebels who have already seized several towns in the north of the resource-rich but poverty-stricken nation.

The United Nations on Wednesday ordered more than 200 non-essential staff and families of other workers to leave.

"The temporary relocation is a precautionary measure to reduce our presence in the event the security situation further deteriorates in Bangui," U.N. spokesman Martin Nesirky said.

The rebels' "contradictory messages and their continued military offensive seem to indicate that they might be intent on taking Bangui," he added.

Washington expressed "deep concern" and warned all Americans to leave the country "until the security situation improved.”

State Department spokesman Patrick Ventrell also said the ambassador had "authorized the departure of family members and non-emergency personnel from our Embassy in Bangui as a result of increased rebel activity in the north central part of the country."

"We call on all the sons and daughters of Central Africa, on all members of defense and security forces still loyal to Francois Bozize's regime... to lay down their arms immediately," said a statement from the Seleka rebel coalition after capturing its fourth major town in a month.

"For reasons of security and protection of civilians, we no longer consider it necessary to wage the battle for Bangui and to send our troops there as General Francois Bozize... has already lost control of the country," it said.

The Seleka coalition is made up of rebels who say the government has not honored peace accords signed between 2007 and 2011 that offered financial support and other help for insurgents who laid down their arms.

The rebels' statement came as hundreds of demonstrators close to the embattled president turned on the French embassy.

The rally had begun at the U.S. embassy where demonstrators chanted calls for peace but at the French embassy the mood turned violent and protestors broke windows and tore down France's flag.

"This situation is completely unacceptable," said French ambassador Serge Mucetti, calling on the authorities to respect the appropriate diplomatic agreements.

Around 30 French soldiers subsequently arrived to provide extra security at the embassy, an AFP correspondent reported.

In Paris, French President Francois Hollande called on Defenae Minister Jean-Yves Le Drian to ensure the safety of the 1,200 or so French citizens in the country.

Protesters also attacked the offices of Air France, an AFP reporter witnessed. In response, the company said its weekly flight to Bangui had turned back to Paris.

The government in Bangui in a statement urged France to facilitate a dialogue with the rebels, who have met little resistance from the ill-equipped and under-paid Central African army.

Since the end of colonization in the 1960s, French troops in western Africa have often come to the help of former colonies whose regimes were on the verge of being toppled.

France has around 250 soldiers based at Bangui airport providing technical support to a peacekeeping mission run by the central African bloc ECCAS, according to the defense ministry.

Nassour Ouaidou, the head of the Economic Community of Central African States, told AFP in Libreville the body was trying to broker a truce.

"The ECCAS is in the middle of sending a team on the ground to try and get a ceasefire from one side and the other," he said.

Neighboring Chad sent troops into the country after a request from Bozize to try to stem the rebel advance. Chadian troops have previously helped Bozize during rebellions in the north in 2010.

Aid groups said that while there were as yet few serious consequences from the rebel offensive, civilians who had fled the fighting were hesitant to return home.

"Residents have scattered from certain cities either on rumors of the advancing rebels or once the city changed hands," said Arnaud de Baecque of the International Committee of the Red Cross in Bangui.