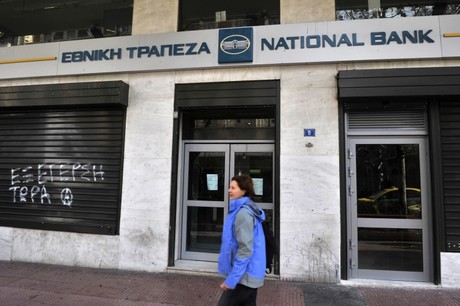 "Capital needs for all Greek commercial banks were estimated in May 2012 at 40.5 billion euros, of which the 27.5 billion euros corresponded to the four core banks," it said.

The four banks, identified as the National Bank of Greece (NBG), Alpha, Eurobank, and Piraeus, will receive support from the state because they are considered crucial to the national banking sector.

A dozen smaller banks are to be recapitalized with private funds, also by the end of April, the national bank said.

"The Greek banking sector was severely hit over the past few years by the combined effects of the restructuring of Greek sovereign debt and adverse economic conditions, both of which affected banking assets and deposits," the central bank's report explained.

Its assessment of the bank's recapitalization needs over the 2012-2014 period was "conservative" it said. A key factor behind the needs was a restructuring of Greece's sovereign debt, it said, which hit Greek banks hard because they held large amounts of sovereign bonds.

The banks were also expected to suffer losses on both domestic and international loans.

According to the central bank, the main objective of its "comprehensive banking sector strategy is to secure a well-capitalized and viable banking sector."

"The improvement in the capital and the liquidity position of Greek banks will enable them, in the medium term... to help improve the business environment and put the real economy back into a sustainable path," the report said.

Greece's main banks had been expected to receive 50 billion euros overall to restore their capital after taking part in a sovereign debt write-down of more than 100 billion euros in March, and a subsequent debt buy-back earlier this month.

European leaders have decided meanwhile to unblock 49.1 billion euros from Greece's outstanding financial assistance package by early next year in return for a new austerity deal in Athens.

Of that amount, around 16 billion euros is earmarked for aid to Greek banks, on top of 18 billion already granted in May.

The ratings agency Standard and Poor's has given Greece's sovereign debt a six-point grade increase, while the European Central Bank has said it would again accept Greek bonds as collateral for central bank loans.