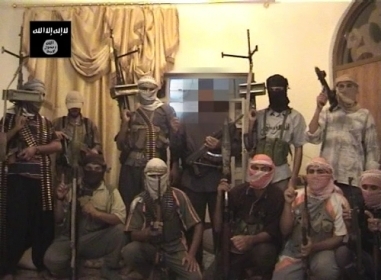 A U.S. drone strike in the Yemeni town of Shehr in the eastern province of Hadramawt killed two suspected members of al-Qaida on Friday, a local official said.

"Two members of al-Qaida on a motorcycle died on the spot when targeted by a missile fired by a U.S. drone," the official said on condition of anonymity.

On Monday, four other members of al-Qaida were killed and another wounded by three missiles fired at motorbikes in the same town.

Those missiles were also fired by an "American drone" in the center of Shehr, a town east of the provincial capital Mukalla, an official had said.

U.S. drones have backed Yemeni forces combating militants of al-Qaida in the Arabian Peninsula, the group's Yemen branch, considered by Washington to be the most active and deadliest franchise of the global jihadist network.

AQAP took advantage of the weakness of Yemen's central government during an uprising last year against now ousted president Ali Abdullah Saleh, seizing large swathes of territory across the south.

But after a month-long offensive launched in May by Yemeni troops, most militants fled to the more lawless desert regions of the east.