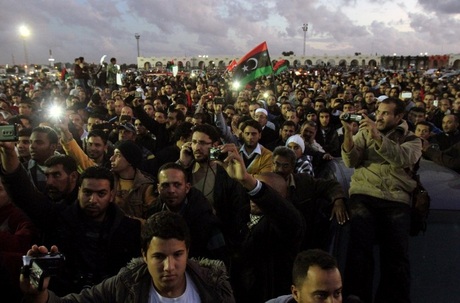 Some 2,000 people rallied in Libya's second city Benghazi on Friday to demand that militias made up of former rebels who helped oust dictator Moammar Gadhafi disband and join the army or police.

"Our demands are: dissolve all militias and make their members individually enter the army or police force," activist and law student Bilal Bettamer said.

"And we want all pro-Gadhafi and Gadhafi-era criminals to be removed from the police and army. We want to end this stalemate between the army and militias," he added.

Former rebels who have refused to join the security forces insist that the authorities first purge them of remnants of the Gadhafi regime.

Helicopters and fighter jets flew over the "Benghazi will not die" rally, which came a week after the army deployed units in the city to bolster security.

Banners read: "We want a unified army," and "no more assassinations."

Benghazi has witnessed a series of attacks against police stations and assassinations targeting military officers.

It has also become a focus for jihadist groups, including militants who killed ambassador Chris Stevens and three other Americans in a September 11 attack on the U.S. consulate.