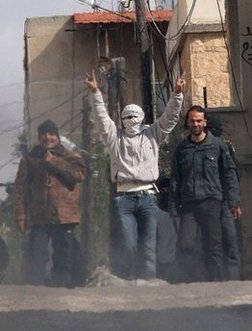 Rebels pushed to consolidate gains in northwestern Syria on Saturday, storming a key army post and fighting for control of an airbase, a watchdog said.

President Bashar Assad's forces meanwhile recaptured a neighborhood of the central city of Homs that had been held by rebels for most of the year after a fierce assault that sparked a humanitarian crisis.

In Idlib province, insurgents stormed the Hamidiyeh army post, paving the way for the takeover of the nearby Wadi Deif garrison, the Britain-based watchdog said.

Fierce clashes between loyalist troops and insurgents, mostly from the jihadist al-Nusra Front, erupted inside the base, where loud explosions were heard.

Wadi Deif is one of the government's last outposts in the largely rebel-held north.

Near second city Aleppo, warplanes pounded rebel positions around the Menagh airbase, after rebels penetrated the perimeter on Thursday following a months-long siege, the Observatory said.

Air strikes and artillery fire were reported in several areas near Damascus, including Daraya to the southwest, where clashes raged as the army pressed its bid to retake the town.

In Homs, troops overran the Deir Baalbeh, which was the target of a major army offensive in February that left 700 people killed, most of them civilians.

Nationwide, at least 81 people were killed in violence on Saturday, 43 of them civilians, the Observatory said.

I like these news, I want to read more of these good news.

When Wadi Deif falls, ASSad's troops will have to withdraw from Aleppo. Both Idlib and Aleppo provinces will be 100% in FSA hands. The drive to Hama and Homs will begin and will cut off 100% the coast from ASSad. He will not be able to re-supply. The airport is shut down from before. The end is coming.

Let Flame Retardant and Mo-Propaganda try and spin this any way the want, but their master is going to fall, and the Hezz will be on the losing side of a war.