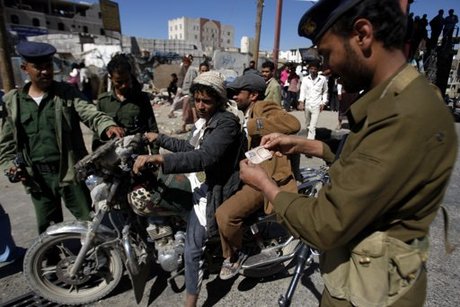 "The campaign has succeeded in stopping 500 unlicensed motorbikes and 72 cars without number plates, some of which are suspected to have been used in assassinations," an interior ministry report said, adding that 50 weapons such as Kalashnikovs and other firearms were seized during the crackdown.

The interior ministry says that 40 members of the security forces and four civilians were killed in 2012 in hit-and-run shootings by gunmen on motorbikes.

Sanaa security chief, Omar Abdelkarim, said that "terrorist groups" have used the unrest in Yemen "to reorganize their ranks and launch a series of hit-and-run assassinations."

There are over 200,000 motorbikes across Yemen, most of which are unregistered, according to Sanaa police.

Some 103 police patrols took part in the campaign, which began in Sanaa on Saturday, according to the ministry.

Residents said that police checkpoints were set up across the capital at which vehicles and motorbikes without number plates were stopped.

Passersby were also searched for unlicensed weapons in the country where gun ownership has long been a key part of culture.

Yemen has an estimated 60 million firearms in private hands, roughly three for every resident.

al-Qaida in the Arabian Peninsula has been blamed for most of the killings although it has not claimed responsibility for any of the assassinations.

But a month-long government offensive that ended in June pushed most of the militants to the more lawless desert regions of the east.