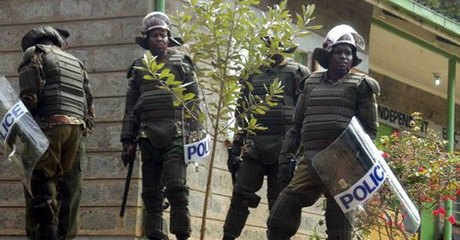 At least 10 people, five of them children, were killed in a retaliatory raid Thursday in Kenya's volatile Tana River delta region, the latest outbreak of violence ahead of elections due in less than two months, officials said.

Red Cross officials said the victims in the Pokomo village of Kibusu were killed by raiders carrying guns and machetes.

Violence between the two communities first erupted in August, pitting the Pokomo farming community against their Orma pastoralist neighbors and leading to a series of vicious reprisal killings and attacks that left more than 150 people dead.

The repeated outbreaks of violence have raised security concerns ahead of elections due on March 4, with police investigating local politicians for alleged involvement in the unrest.

Regional police chief Aggrey Adoli admitted Thursday there was "a problem in the area" and blamed local politicians for failing to play a bigger role in calming the violence.

"Most of the local politicians have been silent on the violence... a majority of them have neither condemned the atrocious acts nor asked the people for restraint," said Adoli.

Large numbers of security forces were deployed in the region following attacks last year, but the clashes have continued.

The two communities have clashed intermittently for years mainly over access to grazing, farmland and access to water in the coastal region.

But the scale and intensity of recent killings -- with women and children hacked to death or torched in their huts -- have shocked many, with some locals accusing politicians of fueling the unrest.

In December at least 45 people were killed in one attack.

The March elections are for the presidency and parliament, as well as for regional gubernatorial posts and local councils. The run-up to the vote has been marked by renewed tensions both at the national political and grassroots levels.

Elections five years ago descended into deadly post-poll killings that shattered Kenya's image as a beacon of regional stability, with at least 1,100 people killed and more than 600,000 displaced.