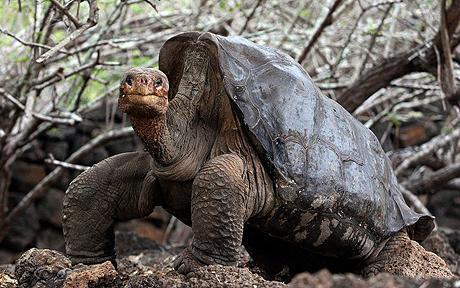 Breeding season is underway for the endangered tortoises of Ecuador's Galapagos Islands, whose mating and nesting habits are carefully watched by wildlife specialists hoping to save them from extinction.

Nesting began last month at Galapagos National Park and will be monitored through June to determine how many female tortoises have prepared nests and how many hatchlings are likely to emerge.

During the peak nesting period, as many as 50 female tortoises can be found preparing nests on the same stretch of beach, said Eduardo Espinoza, a marine biologist at the park.

The Galapagos, located some 1,000 kilometers (620 miles) off Ecuador's coast, is an archipelago of 13 islands and more than 100 rocks and micro-islands.

The islands became famous when Charles Darwin visited in 1835 to conduct landmark research that inspired his revolutionary theories on evolution.

In 2007, UNESCO declared the island chain's environment endangered due to the increase in tourism and the introduction of invasive species.

Experts estimate there were once some 300,000 giant tortoises on the remote Pacific archipelago, but the population dwindled during the 18th and 19th century after they were hunted by whalers and pirates as fresh food.

The invaders also introduced predators, including rats, which have reduced the tortoise population.

Today, between about 30,000 and 40,000 tortoises remain on the Galapagos, declared a UNESCO World Heritage Site in 1978 because of their unique plant and animal life.