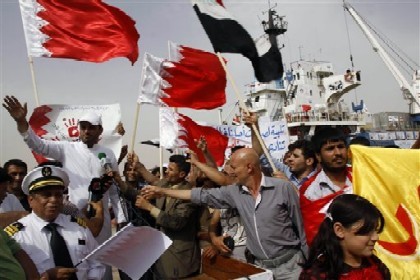 Thousands of Shiites demonstrated near Manama on Saturday in a new protest against an appeals court upholding jail terms for 13 activists on charges of plotting to overthrow Bahrain's monarchy, witnesses said.

"We will not resign ourselves to it" and "we will not forget the prisoners," shouted demonstrators during the peaceful protest that was monitored by a heavy security presence. Some carried photos of those convicted.

On Monday, the Court of Cassation upheld sentences ranging from between five years and life in prison against the 13, who took part in 2011 anti-government protests.

They were convicted by a military tribunal on charges that included "setting up terror groups to topple the regime," and were later retried in a civilian court.

Hours after the ruling, hundreds of people gathered in the Shiite village of Malkiya in support of the prisoners.

Since February 2011, Bahrain has been shaken by opposition protests that the authorities of the Sunni-dominated kingdom say are being fueled by Shiite Iran across the Gulf.

At the time, the main Shiite opposition movement al-Wefaq called the verdict political and said it reflected the "absolute absence of an independent judiciary."

A Saturday statement by the opposition denounced what it called a "political trial," and claimed that the judicial system was being "used as a tool of vengeance against (regime) opponents."