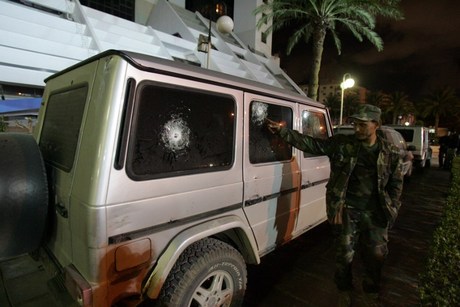 Italian Foreign Minister Giulio Terzi on Sunday condemned as "a vile act of terrorism" a gun attack on Italy's consul to Benghazi in eastern Libya from which the diplomat escaped unscathed.

"This was an attempt to destabilize the institutions of the new Libya," Terzi also said in a statement after consul Guido De Sanctis's bullet-proof car came under fire on Saturday.

"He was unhurt thanks to the security precautions taken to protect him," Terzi said.

The incident comes four months after U.S. Ambassador Chris Stevens and three other Americans were killed in the city in an attack on the U.S. mission there.

The Libyan government "has guaranteed its maximum commitment to ensure those responsible for this vile act of terrorism face justice," Terzi said.

"Italy expresses its strongest condemnation and reaffirms its full support for the course of democracy and reforms of authorities in Tripoli."

The impact of the bullets was clearly visible on the windows of the car, which was shot at as the consul was returning home after work.

A security official in Benghazi said no one was injured in the attack.

The source added that "members of the supreme security committee deployed to the scene and escorted the consul to a safe location."

He said no arrests had yet been made.

Italy is also the biggest foreign investor in Libya's energy industry and has been building up relations with the new government in recent months.

De Sanctis, 51, has been in Benghazi since the start of the uprising against Gadhafi in 2011 and was due to leave for a posting in Qatar next week.