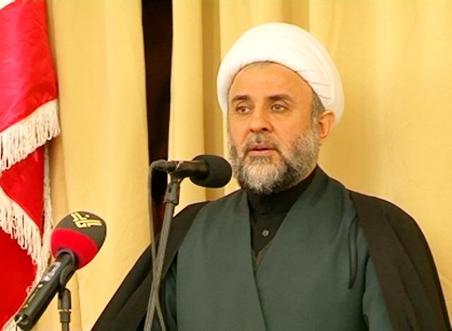 Hizbullah on Sunday stressed that the upcoming parliamentary elections will not affect the so-called "resistance-army-people equation" regardless of who wins the vote.

"The electoral juncture is a chance for rapprochement and agreement on a new electoral law, as the 1960 law now belongs to the past,” deputy head of Hizbullah's Executive Council, Sheikh Nabil Qaouq, said.

He noted that all parties are now “discussing a new electoral law that ensures real equal power-sharing between Christians and Muslims and true partnership.”

A parliamentary subcommittee is debating several electoral systems and the law proposed by the Orthodox Gathering has reportedly received the approval of six major parliamentary blocs, including Hizbullah's Loyalty to Resistance.

But Qaouq emphasized that “whatever the new electoral law might be, whatever the results, this will not affect the resistance-army-people equation.”

"If the enemies are betting on an electoral law aimed at weakening the resistance, they are being delusional, because the equation of the resistance is more deep-rooted than mountains," Qaouq added.

The ministerial Policy Statement of Prime Minister Najib Miqati's government mentions the "resistance-army-people" formula, but it is not stipulated by the constitution.

equations and formulas and whatever.. don't these people get tried of regurgitating the same crab over and over...when will they will ever know that 75% of the lebanese want to live under the rule of law and move on with their lives..

the filthy zionist scum never "gets tired of regurgitating the same crap over and over", and than he accuses others of doing so!!!
lol

the filthy zionist scumm is very bad in math.

i guess to keep distorted mind you have to distort a lot of facts before.

of course it won t affect them... don t they say that they don t care about election results! lol!

hey man.. did they teach you at school that no one is supposed to disagree with you. and if that did they are betraying you right.. man im lucky i never went to your school..

Hizbullah on Sunday stressed that the upcoming parliamentary elections will not affect the so-called "resistance-army-people equation" regardless of who wins the vote............
Yes Hezbullah we know that, you have consistently demonstrated that since 2005. This is why Harriri was liquidated and subsequently every leader that showed promise for a better Lebanon (Gibran, Pierre, ... and dozen others). Once upon a time we used to think it is all about Israel but now it is clear as daylight that it is all about YOU. How else can you be in control of the Government when you were not the majority in the previous elections. Save your breath, your actions throughout the years support you statements (at least you are consistent on both). But the wheels will turn and one day you will find yourself needing the mercy of others for God is Great.

how do i know that text if full of retarded claims?

easy
it always is

bro isreal killed all those to make us fight!!! they are putting bets on us man..

--yes it will, otherwise you wouldn't have brought it up. and when the murderous regimes of Syria and Iran fall, you will be looking around and wondering why everyone didn't rally around you. And for the record, over 200 nations in the UN, and only TWO don't believe in the STL--Syria and Iran. It is not a conspiracy---it is a trial based on evidence, not insistence.

the filthy zionist scum hallucinate that election will affect our glorious resistance.

you had a chance when your friend siniora tried to do something and you failed miserably.

only fools don't get lessons from history

Your "equation" is an artificially created justification that you invented to justify your existence which is like an abnormal growth in the body of Lebanon.
Drop your weapons. Drop your pretentions to be more important than the rest of lebanese parties and join the lebanese mosaic as an equal member.

and he's right as always.
like you are wrong as always.

the filthy zionist scum calls most of lebanese as a "horde of blind believers"
in that case, why don't you do something about it.

send your genocidal militia to see how big is the "horde".

were they iranian tools when they were fighting your and my enemy?????
when their kids and fathers died protecting your border?????