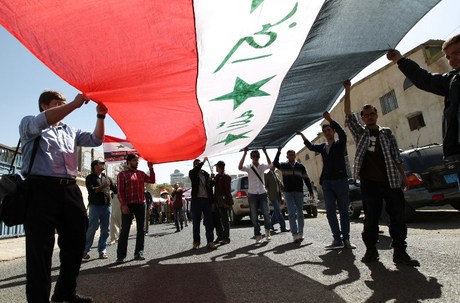 Protests against Maliki and his Shiite-led government have gripped Sunni Arab majority areas of northern and western Iraq since December 23.

The protests were sparked by the arrest of at least nine guards of Sunni Finance Minister Rafa al-Essawi on terror charges.

In a statement, members of the Iraqi community in Yemen who organized Wednesday's protest said it was "to express our support to our Iraqi people who are demonstrating in the squares of dignity for their legitimate demands."

"Free Baghdad, out Iran," the protesters called, referring to Iraq's Shiite-dominated neighbor with which Maliki's government has warm relations.

Iraq is engulfed in a political crisis with Maliki facing calls for his ouster from many of his erstwhile government partners.

A wave of attacks in Baghdad and northern Iraq killed 29 people on Wednesday as hundreds attended the funeral of a Sunni MP who died in a suicide attack on Tuesday.