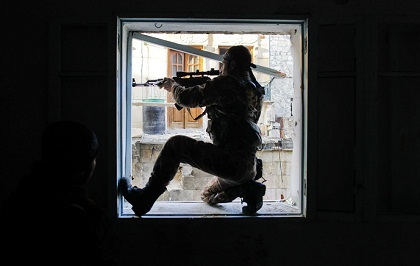 Fierce clashes raged on Friday in the majority Kurdish northern Syrian city of Ras al-Ain on the Turkish border, a day after a sniper killed a French journalist in embattled Aleppo.

The Syrian Observatory for Human Rights confirmed Yves Debay's death on Friday, after Aleppo-based activists accused regime troops of the shooting, and distributed photographs of his body and press card.

The fighting in Ras al-Ain came six months after troops loyal to President Bashar Assad withdrew from majority Kurdish areas, leaving residents to fend for themselves.

Jihadists have since staged several assaults on the strategic city, and most of its residents have fled.

Syria's Kurds are divided over the revolt against Assad -- some support the regime, others back the revolt and yet others are striving to stay neutral.

On Friday, fighters from radical groups Al-Nusra Front and Ghuraba al-Sham battled Kurdish militiamen a day after launching a new assault on the border town, residents and activists said.

On Thursday, "the fighting became more intense in the evening after Kurdish fighters received reinforcements to try to stop the fiercest rebel assault ever since insurgents first arrived in the city" in November, a resident identifying himself only as Mohammed told AFP.

A Kurdish resident of Ras al-Ain, who said he opposed Assad's regime, said the jihadists crossed the Turkish border with three tanks into Ras al-Ain on Thursday.

"The Kurdish fighters have seized one of the tanks," the activist, who identified himself as Havidar, told AFP via the Internet.

While Turkey supports the revolt against Assad, it is also home to a sizable Kurdish minority that has suffered much persecution and suppression.

Activists say they fear Turkey may be using jihadists in Syria to fight its own battle against the Kurds.

"The advancing rebels did not use the tanks to fight the regime. Instead, they used them to shell Ras al-Ain," Havidar said.

Analysts and activists have voiced fears over the potential consequences if the fighting between Kurdish militia and jihadists continues.

"Should the fight morph into a struggle between Kurds and Arabs... Syria and the revolt (against Assad) are both in real danger," said prominent Kurdish activist and journalist Massoud Akko.

Syria's spiraling conflict has killed more than 60,000 people in less than two years, says the U.N. The Observatory has documented 48,000 dead, most of them civilians.

yep, Christians are next. Then come the Shiaa.

"The advancing rebels did not use the tanks to fight the regime. Instead, they used them to shell Ras al-Ain," said Havidar.
They are all Bashars.

These are mercenaries and terrorists of Turkey (by the name of FSA), invading Kurdish areas to lot and terrorise the civilian population, these are another oppressors force to destroy everything civilised.
There are no difference between Syrian regime and those mercenaries by the Ahfad al rasoul and Jabhat al Nusra, one kill with name of regime and FSA kill civilian with name of liberation or revolution. This is the freedom people are expecting from these Islamist terrorists.

Wow. Turkey is playing with fire.