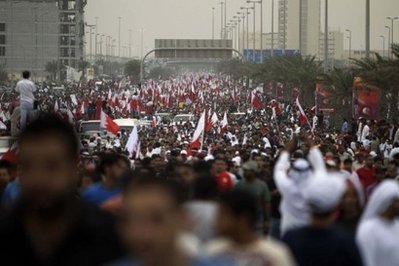 The demonstration coincided with the final football game in the Gulf Cup of Nations being hosted in the Sunni-ruled kingdom.

Police arrested several protesters, including at least one woman, they reported.

Protesters also staged demonstrations and burned tires in villages outside Manama as they failed to reach the capital due to a heavy security cordon, other witnesses said.

The demonstration in Manama was called for by the February 14 Youth Coalition, an Internet group that regularly calls for protests in the Shiite-majority kingdom ruled by the al-Khalifa dynasty.

Bahrain's government said on Thursday the demonstration had not been authorized and warned security forces would prevent it from going ahead.