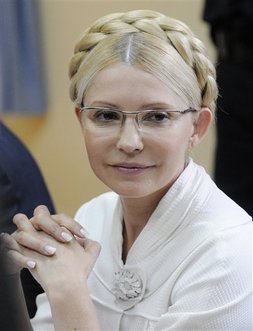 Prosecutors on Friday accused Ukraine's jailed former prime minister Yulia Tymoshenko of organizing the 1996 murder of a powerful lawmaker and warned that a guilty verdict could put her behind bars for life.

Prosecutor General Viktor Pshonka said the fiery 52-year-old has been informed by prosecutors she and another former prime minister detained in the United States are now formal suspects in the murder of deputy Yevgen Shcherban.

"We have collected evidence from the pre-trial investigation indicating that Tymoshenko really did order this murder together with (former prime minister Pavlo) Lazarenko," Pshonka told reporters.

"Today, an investigative team from the prosecutor general's office visited Tymoshenko in order to hand her (her documents on) suspicion of having committed a crime."

He said the opposition leader has been named as suspect under an article in the criminal code which meant she could spend the rest of her life in prison.

Tymoshenko was sentenced to a seven-year jail term in 2011 amid Western outrage at her treatment by the government of her rival, President Viktor Yanukovych.

She is currently being treated for back pain in a hospital outside her prison in the eastern Ukrainian city of Kharkiv.

The start of her second trial on embezzlement and tax evasion has been delayed until February 12 because of her medical condition.

Tymoshenko has also refused to cooperate with either her state doctors or the courts.

Both the 2004 pro-democracy Orange Revolution leader and her supporters claim that all the charges against her as well as the possible murder charges are retribution by the Yanukovych government.

The charges against Tymoshenko and Lazarenko -- a former prime minister and close ally who was convicted and jailed for money laundering in the United States in 2006 -- state that the two paid $2.8 million to a contract killer to eliminate Shcherban.

The powerful politician and businessman was gunned down in a gangland-style shooting at an airport in the Ukrainian city of Donetsk in November 1996.

He was shot by men who pulled up to Shcherban in a car as soon as he stepped down from a passenger jet onto the tarmac.

His slaying became one of the most notorious in a turbulent decade for the former Soviet republic in which huge state enterprises were distributed for pennies on the dollar to rival business groups.

One of the clans came from Shcherban's Donetsk region. Tymoshenko herself is a native of the city of Dnipropetrovsk and has been linked to rival clans from that region.

Ukraine's prosecutor general said the murder case will be combined with embezzlement and tax evasion case that is due to be heard next month.

The decision suggests an eagerness by Ukrainian authorities to speed up the case against Tymoshenko after months of delays on account of her ill health.

The prosecution of the divisive but charismatic figure has jeopardized Ukraine's relations with both Western Europe and the United States.

The European Union has made the release of Tymoshenko and her former government allies a precondition for the signature of a document establishing broader trade and political relations between the two sides.

The document's signing is seen as mandatory for Ukraine potential future membership in the 27-nation alliance.