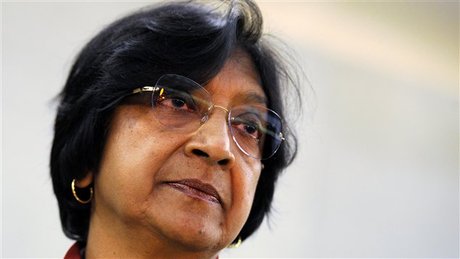 Her call added to a petition by 58 countries calling for a war crimes case over the 22-month-old conflict in which the United Nations says more than 60,000 people have been killed, mostly by President Bashar Assad's forces.

U.N. leader Ban Ki-moon said before the meeting that Syria was in the grip of a "death spiral." But Pillay said after a closed council meeting that she saw little sign that the 15-member body, badly split over the conflict, was ready to take a decision.

"I firmly believe that war crimes and crimes against humanity have been committed, are being committed and should be investigated," Pillay told reporters.

"I have urged the Security Council to refer the situation to the International Criminal Court for investigation of war crimes and crimes against humanity on the part of all parties engaged in this conflict," she added.

Pillay said victims in Syria "see the situation as the United Nations not carrying out its responsibility to protect victims."

Pillay gave the 60,000 death toll earlier this month but said it was an estimate by specialists and was probably much higher. The estimate "does not account for all of the killings in Syria," she said.

U.N. humanitarian chief Valerie Amos said she had raised concerns at the meeting "about the vicious and indiscriminate nature of the violence" and increasing levels of sexual violence and rape.

Syria is not an ICC member and the Security Council is the only body which can refer the conflict to the court.

Russia and China have used their power as permanent members of the Security Council to block three resolutions which would have threatened sanctions against Assad and in some cases a war crimes case.

Diplomats at the council meeting said on condition of anonymity that Russia and its allies opposed the calls for an ICC investigation.

Russia's foreign ministry said this week that an ICC inquiry in Syria would be "untimely and counterproductive."

"It's clear that if a resolution were put forward today it would not be adopted," said Britain's U.N. ambassador Mark Lyall Grant, who with ambassadors from Australia, France, Luxembourg and South Korea spoke outside the meeting to back the petition drawn up by Switzerland calling for the investigation.

Lyall Grant said the signatory countries wanted to send "a clear message that the international community is not turning a blind eye to the atrocities being committed in Syria."

U.N.-Arab League envoy on Syria, Lakhdar Brahimi, is to brief the Security Council on January 29.