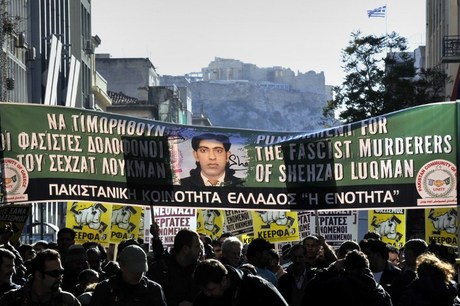 Hundreds of people held a rally against racism and fascism in central Athens on Saturday as mourners gathered to pray over the body of a man killed in a suspected racist attack.

Nearly 3,000 people, according to state broadcaster NET, joined the peaceful protest organized amid a nationwide surge in xenophobic sentiment.

"I have been the victim of a racist attack and when I tried to complain about it I was arrested. Police are the same as Nazis," 35-year-old Gildas Batola from Congo told AFP at the rally organized by groups including municipalities, migrant communities and the radical left main opposition party Syriza.

Protesters carried banners reading: "Fascism never again", "End to racist attacks", "Out with neo-Nazis" -- also a gay flag was thrown into the mix.

Earlier this week, police arrested a 29-year-old firefighter and another man, 25, for the murder of a 27-year-old Pakistani migrant in Athens, in what was feared to be a racism-fueled crime.

The accused said they had had an argument with the victim, who was reportedly on a bicycle on his way to work.

The Pakistani community in Greece held a prayer gathering in memory of the deceased at Kotzia square in central Athens Saturday before joining the peace rally.

A coffin with the dead man's body was at the center of the prayer meeting attended by about 150 people, according to an AFP photographer.

Pakistanis who took part in the anti-racism rally called for the "punishment of the fascist murderers".

International human rights groups have warned of a surge in xenophobic attacks on migrants in Greece, where economic hardship and a sixth year of recession have fueled the rise of the far-right.

In a Greek first, Golden Dawn earlier this year saw 18 deputies elected to the country's 300-seat parliament. Recent polls indicate the party's popularity has since risen to over 10 percent.

In November, the U.S. Embassy in Athens warned Americans to be wary of violent attacks targeting perceived foreign migrants.

On Friday, the Paris-based European Grassroots Antiracist Movement (EGAM) which organized an anti-racism march in Athens in December, called on Greek authorities to stick to their promise to keep neo-Nazis out of the Council of Europe.

The council promotes cooperation between European states on human rights.

Prime Minister Antonis Samaras' conservative New Democracy party, the socialists Pasok, the moderate Democratic Left as well as Syriza have said they are in favor of a Greek parliamentary delegation to the Council that excludes Golden Dawn.