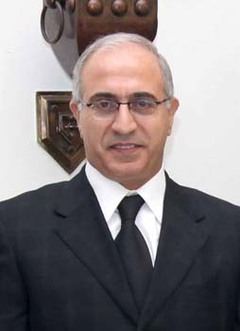 State Commissioner to the Military Court Judge Saqr Saqr charged on Monday the head of an Islamist group with capital murder in the slaying of a Palestinian inmate at Roumieh prison, the National News Agency reported.

NNA said that “Saqr charged the emir of the Islamic group in Roumieh, Mohammed Youssef known as Abu Walid, in the killing of Ghassan al-Qandaqli.”

Al-Qandaqli was found hanging in his cell at the prison’s Bloc B on January 18.

Youssef could face the death penalty if convicted.

Media reports said it took two days of negotiations with the prisoners to allow police to question them over the alleged murder.

The guy on the pic looks like our president Suleiman, slightly slimmer (younger?) with a different hair style.