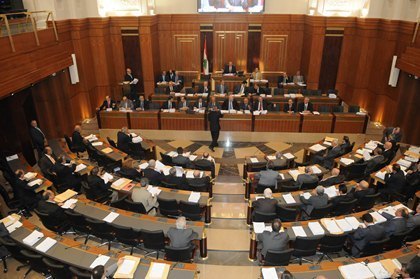 The electoral subcommittee aimed at studying various parliamentary electoral laws is set to resume on Monday, reported the daily An Nahar Sunday.

Speaker Nabih Berri's circles told the daily that he will refer former Prime Minister Saad Hariri's initiative to the joint parliamentary committees once he receives it.

It will then be referred to the electoral subcommittee.

Hariri called for a small-district law for this year’s parliamentary elections and for the establishment of a senate representing all religions and sects as stipulated by the Taef agreement.

Subcommittee circles said that Monday's talks will continue where they last stopped in tackling the hybrid law that combines the winner-takes-all and proportional representation systems.

The Mustaqbal Movement's representative at the subcommittee MP Ahmed Fatfat told An Nahar that the bloc's proposal at Monday's meeting will be based on 26 to 50 electoral districts.

“This suggestion meets the others halfway,” he explained.

He added that he does not oppose extending the subcommittee meetings past the 15-day deadline that was set last week.

Moreover, parliamentary circles monitoring the subcommittee meetings told the daily that divisions exist among its members.

“Matters will remain suspended until an agreement is reached unless some sides are banking on acquiring an upper hand in Lebanon in wake of the results of regional developments,” they said without elaborating.

“The positions over the hybrid law remain vague over the failure to reach an agreement over the number of districts and distribution of candidates,” they added.

The subcommittee had discussed several proposals over the past few weeks, the so-called Orthodox Gathering proposal, a draft-law that divides Lebanon into 50 districts based on a winner-takes-all system, a bill referred to parliament by the government and that calls for 13 districts based on proportionality, in addition to a hybrid suggestion.

The majority of the subcommittee's members have supported the Orthodox proposal which calls for a single district and allows each sect to vote for its own MPs under a proportional representation system.

But the Mustaqbal bloc from the opposition and the Progressive Socialist Party of centrist MP Walid Jumblat have criticized it and stood firm in favor of a winner-takes-all system.

why 60 districts and not 500? just a question because to me I feel the smaller the more accurate.