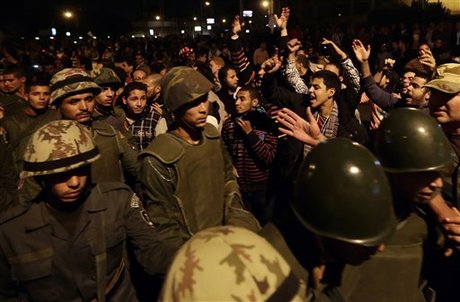 Egyptian police fired tear gas and water cannon at stone-throwing protesters outside the presidential palace on Monday as the opposition rallied to mark the second anniversary of Hosni Mubarak's overthrow.

The clashes broke out after several hundred protesters marched to the palace, the site of increasingly frequent clashes, on a day of marches against Egypt's new Islamist president, Mohamed Morsi.

Opposition groups called for the protests to demand that Morsi fulfill the goals of the revolution which brought him to power along with his long-banned Muslim Brotherhood movement.

Among their key demands are a new unity government, amendments to a controversial Islamist-drafted constitution and the sacking of Egypt's prosecutor general.

The interior ministry said an "angry minority" provoked the clashes when they tried to remove a barbed wire barricade at the gate of the palace in northern Cairo.

Activists are also furious that no one has been held accountable for the deaths of dozens of protesters in past months in clashes with police.

Monday's protests drew a far lower turnout than the anti-Morsi mass rallies of November and December, after the president adopted now repealed powers placing his decisions above judicial oversight.

About 1,000 protesters gathered in central Cairo's Tahrir Square, a protest hub. "The revolution continues" read some banners, as others chanted "After blood has been spilled, there is no legitimacy."

Protesters briefly blocked a major bridge as well as trains in a central metro station, scuffling with passengers and metro police, witnesses and state media reported.

A wave of deadly clashes swept Suez Canal cities around January 25, the anniversary of the start of the anti-Mubarak uprising, in which dozens of protesters were killed, prompting Morsi to call in the military.

Two years ago, Egyptians had poured onto the streets to celebrate after an aide to Mubarak announced the veteran president's resignation, buoyant that democratic change was within reach.

The 84-year-old's spectacular fall from grace on February 11, 2011 after an 18-day popular revolt sent shock waves across the Middle East and beyond.

But two years later, many are angry the main goals of freedom and social justice have not been achieved and that Egypt is polarized between Morsi's mainly Islamist supporters and a broad opposition.

Morsi has said a new government will be formed only after parliamentary elections in three or four months.