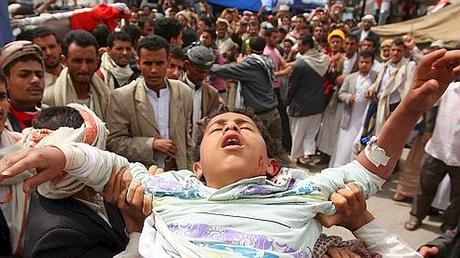 Human Rights Watch on Tuesday urged Yemen to launch an independent probe into the "massacre" of 45 protesters killed on March 18, 2011 during the uprising against former strongman Ali Abdullah Saleh.

HRW said in a report released in Sanaa that an earlier investigation ordered by Saleh into the killings was flawed, calling for a new probe that is "independent, impartial and meets international standards."

"Several senior former and current government officials appear to have played a role in the massacre but have not been charged," the New York-based watchdog said in the 69-page report entitled "Unpunished Massacre."

A new probe must ensure that all those implicated in the killings "regardless of position or rank, are arrested and appropriately prosecuted."

HRW said that 45 Yemeni protesters, most of them university students and three of them children, were killed in three hours on March 18, 2011, while 200 others were wounded by gunmen loyal to Saleh.

"Security forces made no serious effort to stop the carnage," HRW said.

According to HRW 78 suspects were indicted in connection with the killings following the probe ordered by Saleh, but more than half of them remain at large.

Meanwhile, the watchdog said, the trial of the alleged "killers began in September 2012 but ground to a halt after lawyers for the victims sought top officials' indictments."

"Yemen's transition government is basing its prosecution of the case on a deeply flawed investigation by the Saleh administration," said HRW.

Saleh dismissed the attorney general when he demanded that primary suspects, including government officials, be brought for questioning, it said.

Hundreds of people were killed across Yemen during the year-long uprising of 2011 that pushed Saleh out of power after 33 years of iron-fisted rule.

But Saleh only agreed to step down in November 2011 under a Gulf-brokered and U.N.-backed deal that gave him and his aides immunity from prosecution.