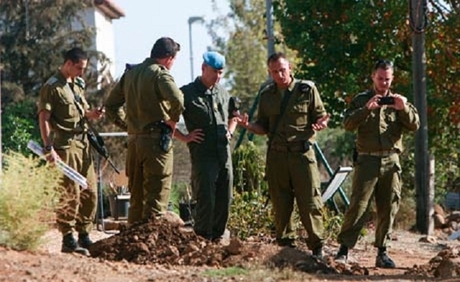 The Israeli army on Saturday evacuated seven Syrians wounded in clashes on the Golan Heights and took them to a hospital inside the Jewish state, where they were being treated for their injuries.

A spokeswoman for the Ziv hospital in Safed told Agence France Presse the army had on Saturday afternoon brought in seven wounded people, all of whom have been operated on.

"One is seriously wounded, even critically wounded; the other six are in moderate condition," she said, adding that they were all still in hospital.

A military spokeswoman earlier told AFP that Israeli "soldiers provided medical care to five injured Syrians adjacent to the security fence" on the Golan Heights and transferred them to a hospital for further medical treatment."

The army later corrected the number of wounded Syrians to seven.

Neither the army nor the hospital would provide details on the nature of their wounds or any political affiliations.

An unnamed military official was cited on public radio as saying that Israel had a policy of providing humanitarian aid to refugees, while keeping the border sealed tight against hostile elements.

The official also told public radio Israel had prepared designated zones near the border to receive Syrian refugees, under the auspices of the United Nations.

He stressed that this did not reflect a change in Israel's stance which does not wish to be involved in the Syrian conflict, nor does it welcome a possible deluge of refugees from the war-torn land.

The Syrian Observatory for Human Rights said on Saturday that rebels overran a military police checkpoint at the Golan Heights town of Khan Arnabeh just beyond the outer ceasefire line along the demilitarized zone bordering Israel.

Regime forces responded by shelling Khan Arnabeh and the nearby village of Jubata al-Khashab, inside the ceasefire zone.

The Golan has been tense since the outbreak nearly two years ago of anti-regime protests in Syria that quickly turned into a bloody insurgency, at times spilling over with mortar and gunfire into the Israeli-held zone.

Last November, Israel responded with artillery after gunfire from Syria hit an army vehicle but caused no injuries, in the first instance of Israeli fire directed at the Syrian military in the Golan since their 1973 war.

Israel seized the Golan from Syria in the 1967 Six-Day War and annexed it in 1981, in a move never recognized by the international community.

Israel is currently upgrading the old security fence along its armistice line with Syria, with work expected to be completed by the end of the year.

Because israel never killed arabs and sunnis, not in palestine, not in lebanon, not in syria, not in egypt, not in jordan, not in sudan etc. No never. As long as they treat 7 syrians to be able to wage their propaganda war and show themselves as the good guys, its all good and lets forget the tens of thousands martyred and the over 1 million ones injured. The concept of the enemy of my enemy is my friend comes from the devil, unfortunatly its very popular among arabs and thats why God keeps humiliating arabs all over the world whether by iranians, zionists, americans or anyone else. No principles, no honor, no dignity. Just as you hate iranians and shia now, 2morrow you would say "the foot of an iranian soldier is better than" whoever it is you will view as your enemy bcuz thats how it is when you have such a mentality. May the foot of that israeli soldier kick you straight to hell for uterring such a sentance.

Actually, YES they have al kafi. By denying it your only showing your true colours. Like i said, as much as u hate shia today, 2morrow u will take them as ur allies when a new enemy comes along bcuz u clearly have no principles nor honor. Just another stupid hateful arab.

Greatpierre, arabs, muslims, christians, turks, kurds, greeks, iranians, burmese, americans, nigerians, kenyans, south africans, mexicans, colombians, british, french, dutch and almost EVERY other people/nation/religion on earth have comitted many thousand crimes against others as well against their own people. Whats your point?

I am not whitewashing anyone or saying the foot of a soldier which is part of a an army that specializes in murder and opression is better than anyone, be he arab, muslim or not!

So your point is completly irrelevent.

Whatever arabs (or anyone else) do against their own (of which i have lots of criticism) it doesnt excuse zionism. Its like planting a jehovas witnesses country inside mexico and then say well these south americans keep murdering themselves for drugs.

I don't think anyone really knows what the word Peace means in the Middle East. Children are brought up hating the Iseralies, one AGANIST another. I am Canadian and i stand with Iseral

in what way is israel the root of all m.e. problems? do you really believe everything the extremists want you to believe? israel is a democratic countries with muslims in every university. israel does not attack unless attacked or threatened, and wants nothing but to survive.
open your eyes. become part of the solution instead of the problem.

Stargate, your words are choking and racist. In any respectable country you would be prosecuted for writing such words

It's true the seems like a tiny act to make the Israelis feel better about themselves, feel like the better people, show themselves and the world that they're the good guys, however, naharnet is the only site I've seen reporting on this story. Wouldn't it have just been Corbett to neglect reporting on this?

Corbett was meant to be cleverer. Excuse ask the autocorrect typos

Screw the Jews & their help .The jews are a true cancer to the Middle East ..

If they never wronged you that means you dont consider the over 1 million arabs among them hundreds of thousands of lebanese, that have been harmed by zionist jews DIRECTLY in several diffirent ways to be worthy. In which case your the type of trash that will have anyone rape your country and fellow people just as long as they dont touch you personly.

By the way, there is a diffirence between what a militia does as in the case of hezballah, mourabitoun, phalange, plo, ishtirakiyyi, LF, ssnp, Amal etc etc of whom all have comitted crimes in lebanon and what israel does. Those militias do not represent all lebanese, palestinians or syrians, whereas israel represents ALL zionist jews. Zionism is based on the fact on systematicly opressing other people.

It takes an educated brain to understand the diffirence.

eltigar, That's a messed up logic don't you think? I was never wronged by the persians but i was harmed in plenty by fellow lebanese for political and/or religious reasons and one time by a blond european (who i think was nordic) for racial reasons as he didn't like the fact that lebanese lived in europe. So should i now forget all the crimes by the persians against as an example sunnis in iran because i was never harmed by persians in particular? Should i not condemn the attacks by han chinese on uigurs, because they never attacked me? I guess when the american army raped teenage iraqi girls and murdererd them or burned down iraq, i shouldn't say a word and instead say "my fellow lebanese wronged me, the americans never wronged me". When nigerian extremist "muslims" massacre nigerian christians, should i say "they never harmed me so who cares about those christians"? That's a nasty way of viewing the world.

Do you think your smart when you write such things? Seriously? The issue here is the reason behind it. Its for propaganda, NOTHING ELSE. They will kill arabs for sport and then pick 7 arabs to treat IN FRONT OF THE CAMERA and you expect us to be impressed or what? Those who are humane do not do comitt the crimes that the israeli army has comitted nor are those crimes forgotten just because 7 injured arabs were treated by these savages who have bombed and maimed/injured hundreds of thousands.

Only a stupid human who consider it humanitarian aid. An educated human would understand the diffirence between humanitarian aid and pure propaganda by a bunch of terrorists who have repeatedly murdered children and adults alike in the most brutal ways for fun as admitted by themselves.

Im sure you already know this but you chose to post such trash only for the sake of arguing. You use the same tactics as other sellouts use thinking your smart. Smallah.

The hypocrites will be in the lowest parts of hell for a reason after all. There is no diffirence between those hypocrites at the time of the prophet (saw) who worked with those among the jews and pagans who tried to harm islam and those hypocrites of today who do the same thing using the same tactics and fake logic while thinking they are smart as if one cant see right through you. You will loose big time just like those before you lost big time.

Shame on you al-kafi.