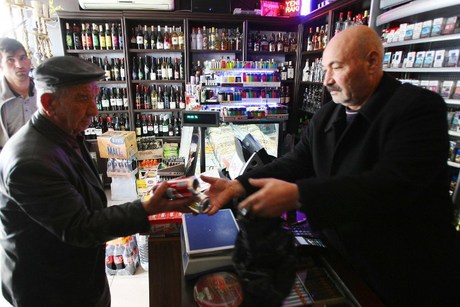 More than 50 people have died in Libya since Saturday after drinking cheap homemade alcohol and hundreds were poisoned, the health ministry said on Monday, as the authorities in the Muslim country vowed a crackdown on booze trafficking.

The ministry said 38 people died in Tripoli hospitals while 13 others perished on their way to neighboring Tunisia, where their families were hoping they could be treated.

At least 378 people were poisoned after drinking the homemade brew known locally as Boukha that was tainted with methanol, the ministry added, while urging Libyans to stop consuming any form of alcohol.

A security official, asking to remain anonymous, said the authorities were preparing to crackdown on suppliers and traffickers of alcohol, whose sale and consumption is prohibited in Libya, although it can be found on the black market.

Interior ministry spokesman Houssine al-Ameri told Agence France Presse that an investigation had been launched to determine who was responsible for the killer booze.

A health ministry source said at least two women were among the victims but refused to give further details due to the "delicate" nature of the issue and the sensitivities of the families of the victims in the ultra-conservative country.

He said those thought to have consumed the toxic drink ranging in age from 19 to 50.

Methanol, which is also used as fuel, is often mixed with homemade booze in small quantities to strengthen its alcoholic content.

Its health risks include blindness, kidney failure and seizures, and it can be fatal if the methanol content is more concentrated.

With its porous borders, Libya has seen a significant increase in drug and alcohol trafficking since the now-slain dictator Moammar Gadhafi's regime was ousted in 2011.

Much of Tripoli's booze supplies are smuggled in from neighboring Tunisia, Malta or Algeria.

But locally produced alcohol is much cheaper than foreign imports and is therefore particularly popular among the poorer sections of society.

Boukha, meaning water of life in the local dialect, is made from figs, dates and other fruit, but is often stored in basic, unhygienic conditions.

It fetches around 10 Libyan dinars (eight dollars) per litre compared with between 120-150 dinars (95 to 120 dollars) for a bottle of whiskey.

The Libyan security forces, as well as ex-rebel militia, regularly claim to have busted illegal alcohol distilleries, often hidden on villas and farms in the suburbs of Tripoli.

Libyan customs also frequently announce the seizure of large quantities of alcohol being smuggled into the country.

In December, more than 7,000 bottles of booze were found in a container in Tripoli port, surrounded by cartons of juice.

And there are fears in the overwhelmingly Muslim nation, especially among Libya's tiny Christian population, of a rise in hardline religious thinking after the revolt against Gadhafi, in which radical Islamists played a major part.