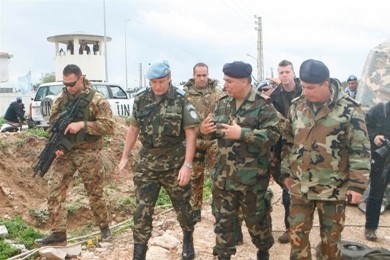 “The Malaysian and Ghanian battalions were intercepted after several peacekeepers were spotted filming in the village,” radio Voice of Lebanon (93.3) reported.

VDL later added that the army intelligence has interfered and took control of the situation.

In January, the state-run National News Agency reported that a spat erupted between a patrol for the UNIFIL and residents in the southern town of Aita al-Shaab.

The residents “confiscated a camera from the peacekeepers for suspecting that the troops were taking pictures of their town,” the agency added.

A dispute also occurred in June 2012 between peacekeeping troops and the residents of the southern border town of Maroun al-Ras, UNIFIL spokesperson Andrea Tenenti said .

According to the NNA, the UNIFIL peacekeepers were taking snapshots of the area when several civilians came across and took the camera from them.

Unifil should have a mandate to defend themselves!

Fayez Karam does, OK everybody follow FlameThrower to Karam the convicted spy's house Thrower's about to make a citizen's arrest.

yes it is coming and that is for sure. my feelings too go for the poor shia who followed blindly hizbushaitan to their destruction.

Tu as raison FT, I had to stop taking pictures of our parliament in Beirut. The house of democracy... I was shocked.

FT you are so stupid with your remarks. Again when you find no excuse on behaviour against the UNIFIL you make an attack on M14, this time on Solider. Well I went and took many picture in solider and no one took my camera, though i was kindly told not to come close to the serail, ambassies, and beit el wasat for security reasons.

This is nothing but a simple unfortunate misunderstanding. The UN guys stumbled upon one of the brother Moussawi's Captagon manufacturing plants, one of Hezballah's many many world famous job creation programs. Another of Hezballah's job creation programs the brothers Fneish's counterfeit drug manufacturing plant next door was closed today Sunday because it was manned by Shiites pretending to be Christians. They were occupied pretending to celebrate palm Sunday with a festive procession around the village complete with olive branches, candles and a confiscated church bell; the head beating and jumping around shouting "YA MASSIH, YA MASSIH" confused some and bemused other onlookers.

GreatPierro. They didn't take my cam but I was forced to delete the pic of the Parliament. How ridiculous! I have been inside the pentagon once when I was on holiday in the US but can't take snapshots of downtown Beirut.... It's sick.

Please greenie, I join the move against personal attacks on naharnet. You don't need to say "sermeye" "sha7ata" or "babouche" when you name someone. Let's show we're civilized people... At least here even though it isn't the case in Lebanon when people behave like neolithic barbarians.