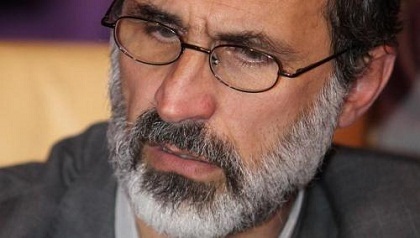 Syrian opposition chief Ahmed Moaz al-Khatib, who surprised everyone by resigning his post, will complete his six-month term before stepping down, a U.S. official said Thursday.

Khatib, a former imam, was only elected to head the Syrian opposition coalition in November after significant pressure from Washington to get the rebels to unify and be more inclusive.

He resigned from his post on Sunday, five days after the controversial election in Istanbul of interim prime minister Ghassan Hitto, who some opposition leaders have complained was imposed on them by other nations.

But Khatib headed the Syrian opposition delegation that took over Syria's seat at an Arab League summit in Doha this week, and there were doubts over whether he would indeed step down.

"Our understanding is that he has now said that he will fulfill his responsibilities. He was named president for six months," State Department spokeswoman Victoria Nuland said.

Khatib was now in discussions with "Hitto and various other members of the opposition remain in dialogue with each other about the best way forward," she told journalists.

A six-month term would likely expire for Khatib some time in May.

"We are emphasizing to all of them to remain unified, remain effective and to keep their eye on the ball, which is to help the Syrian people... achieve their aspirations in the future," Nuland said.

"What's important to us is that they continue working together on a better future for Syria."

Stylish and intellectual in appearance, Khatib with his salt-and-pepper beard and Western suits -- but never a tie -- has taken risks to impose his convictions, albeit with calm determination.

In February, he surprised both his allies and the Assad regime by offering to open talks with the Damascus government, subject to conditions including the release of 160,000 detainees.

The Syrian regime rejected conditional talks as some of Khatib's detractors in the opposition labeled his offer traitorous and incoherent.

"I cannot accept that those who talk about negotiations are accused of treason," he said.

"Some have told me that men of politics do not talk this way... I say to them: I am just a revolutionary."