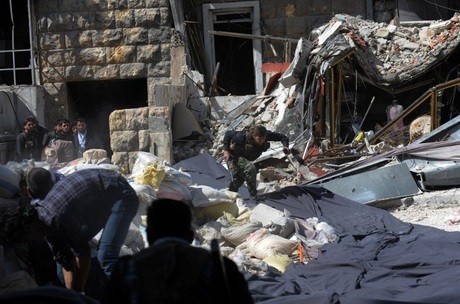 The month of March was the deadliest in Syria's two-year conflict, with more than 6,000 people killed, a monitoring group said on Monday.

"At least 6,005 people were killed in March. A total of 2,080 were civilians, among them 298 children aged under 16. Another 291 fatalities were women," said Syrian Observatory for Human Rights director Rami Abdel Rahman.

Most rebel fighters in Syria's conflict are civilians who have taken up arms to fight against forces loyal to President Bashar Assad.

Of the total killed in March, at least 2,074 were rebel fighters, among them 86 former Syrian army soldiers who defected and joined the insurgency, Abdel Rahman said.

Also among them were 588 rebels whose names the group could not verify, including "a large number of non-Syrian fighters," said the Observatory, which relies on a network of activists, lawyers and medics for its information.

The Observatory also reported the deaths of 387 people whose identities were impossible to verify.

"We believe the actual numbers of army troops and rebels killed in March were higher," said Abdel Rahman, adding both sides in Syria's war try to conceal the full extent of casualties to boost morale.

The United Nations said in January that more than 70,000 people have been killed in Syria since March 2011.

The Observatory uses reports from the field and footage of bodies to document fatalities. It also works to record the victims' names, though Abdel Rahman admits that is not always possible.

I suppose that recently more facts are getting revealed as CIA will be more engaged in the insurgent operation even under the particular law for one related to al-Queda - the counter terorism -. But as last time of WSJ reported, the US government removed terrorists on the list of a paper but they exchanged the intelligence as well as the operations with fighters who are yet working with such terrorists ! I can not support the reform for democracy will go on in such manner. Must consider the victim of civilan. How do you thin the CIA of US's operation which will be backed by law to work with terrorists ?