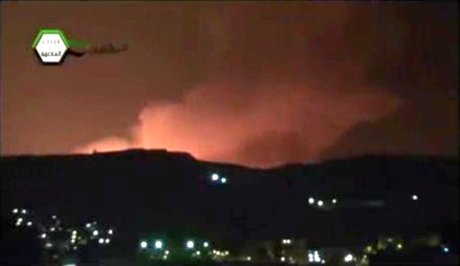 Egypt on Sunday condemned Israeli air strikes on Syria, with the Arab League also demanding that the U.N. Security Council act to stop what it called Israeli "attacks" against the war-torn country.

The Egyptian presidency said in a statement the air strikes "violated international law and principles that will further complicate the situation." The raids reportedly targeted rockets destined for Lebanon's Hizbullah.

The Arab League, which like Egypt sides with rebels against Syrian President Bashar Assad, demanded the Security Council "act immediately to end Israeli attacks on Syria," which it called a "dangerous violation of an Arab state's sovereignty."

The presidency in Cairo affirmed "its extreme opposition" to the Syrian regime's bloody crackdown on rebel-held areas, but accused Israel of "exploiting its internal conflict."

A senior Israeli source said an overnight aerial assault hit Iranian weapons destined for Hizbullah, which is closely allied to the Syrian regime.

The AL is content with having over 70,000 ppl killed without taking additional measures to stop the killing. The sad part is that the UNSC will more likely come to consensus on condemning Israel while it too allows the civil war and civilian deaths -- even if by chemical weapons -- go unaddressed. Not to mention the UNHRC which has taken very limited action in Syria, Iraq and Afganistan given the level of civilian casualties there.

I'm surprised
why would Arab leaque care about Syria and its govermant
didn't Arab league (Qatar and S. Arabia) throw out the govermant of Assad from it's body, now they care what happens to them
That is called 2 faced demogagry