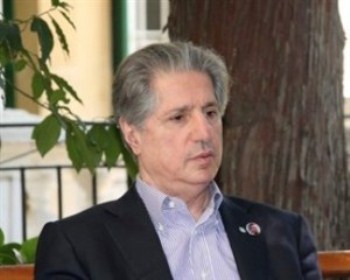 Phalange Party leader Amin Gemayel warned on Friday against what he described as “a dangerous reality” facing the Christians in Syria and the region, and called on the international community to stop the bloodshed and stop oppression against the Christians, the state-run National News Agency quoted him as saying from Rome.

“I call on the international community to stop the bloodshed, protect emerging democracies, and halt the aggression against the Christians,” said Gemayel.

On the fate of the Syrian regime, Gemayel stated: “Dictatorships will eventually fall, but we hope the suffering in Syria ends as it is causing a humanitarian disaster.”

Commenting on the future of the Lebanese-Syrian relations, the former president assured: “Relations will automatically go back to normal, like any one between two Arab sovereign states. There is no turning back now after the exchange of diplomatic missions and Lebanon's refusal to accept any kind of tutelage.”

“But relations can't settle down unless a democratic regime that respects international relations is established in Syria,” he added.

Gemayel is in Rome to holds talks with Italian officials on the situation in Lebanon in light of the turmoil in Syria and the thorny issue of the Syrian refugees burdening Lebanon's security, economic and social capabilities.

Since the Syrian uprising erupted in March 2011, there have been numerous deadly clashes along the northern and eastern borders of Lebanon, usually between the Syrian army and armed Syrian or Lebanese groups backing the uprising.

There have also been clashes between armed groups and the Lebanese army seeking to prevent the infiltration of fighters into Lebanon.

Moreover, more than 453,000 Syrian refugees fled the crackdown in their country to Lebanon, according to the United Nations High Commissioner for Refugees in its weekly report on Thursday.

sykes picot is dying...it will be replaced by a religious sykes picot.

the same old speech on and on forever... christians are threatened... strange that for centuries this speech has been going on but christians are still here alive and kicking.... so stop that victimization and complex of inferiority!

FT - In Egypt, there is a vibrant Christian community. In Iraq, it was decimated due to the US invasion, the civil war the ensued and Al-Qaeda who were assisted at the time by the Syrian and Iranian regimes until their usefuleness expired and the US decided to cut loss and leave.

There is something like 2 million Christians in Syria which could be relocated to Lebanon under an agreement of shipping there the Sunni of Lebanon. The Shia will ultimately relocate to where Bashar would be in his new enclave that he started to chart by ethnic cleansing. Like this we will have a defined Christian borders for a new Christian state which will remain called Lebanon because only the Christians believe in this name. The Sunni will name Syria the way they want, while the Shia and Bashar will give an Iranian name to their new country, like this we will all live in peace under the UN charter. Each has a harmonious country as far as religion is concerned. We will all live happily ever after. Let’s not foul ourselves; this mixture of religions is not for the Middle Eastern countries. I forgot to mention the Christians in Egypt that count 12 million; these will also get a state for them.

my name was erased off of naharnet becuase i am pro bashar...but look whose back baby!!!

Josh...let me get this straight from YOU. Your coward President Assad or his 'lion' father never fired a shot against Israel, but together they've killed upwards of over 125,000 Syrians so who is the coward here, wiseguy? Assad is toast, and the Syrian Christians who supported him did so out of fear, not out of respect, and NOW, it is coming back to haunt THEM. At least the Lebanese Christians fought for their rights and their survival, while the Syrian Christians are doomed because they so stupidly backed a dictatorship, that has been destined for death, for 40 years. Did the Syrian Christians think Bath Assad was going to go on and live forever to protect them? How stupid...Freedom is not free and if you want your freedom, you need to sacrifice for it. Syria destroyed Lebanon and karma is a bitch, pal, because what goes around, is now coming around, and soon Bashar and his boys will be hanging from the light poles in Old Damascus....

Sidon93 - Josh does not know anything about Baath. Michel Aflak, a founder and the main intellectual driver of Baath and Arabism, was sentenced to death by the regime of Assad!

Josh, you are not a Christian but a terrorist who wants to make the lives of the Christians in Syria more miserable. The people who are invading Syria are radical Muslims who don't represents the Majority of Muslims or the Syrians. As for the Christians, they like to live in free society, but there is non of these freedom in the Middle East. You will replace Assad with a criminal radicals that will divide your country. The stupidity of the modern radicals is beyond description, since they work with Israel, USA, and the Saudis. Assad might have been bad, but Brotherhood are worse and hizballah and other criminal group are never better that any stable society. The West who supported is even more stupid. A society made of slaves will never be able to govern itself. Our Middle Eastern societies are made up of majority of ignorant, uneducated and unlearned population. They are good people, but so was the German before the Nazi.

Yaaneh, H.A. selling the country to the Persian filth is truly better than forging an alliance with Israel or any other non-Muslin Country? Bachir did what, at the time, may or would have served the desired agenda. Which weaker/disadvantaged regime has not allied itself with someone? The above is not the problem. The problem arises from a M.E. that is truly divided, and any cooperation exists in the fringes of their moral senses, and, on the other hand, disassociation (i.e. Sunni vs. Shiite killing) is rampant with the aggressors/oppressors often being the Sunnis. What the filthy Turks did to the Christian Armenians will never be forgotten, and the day will come... All this has happened before and will happen again.