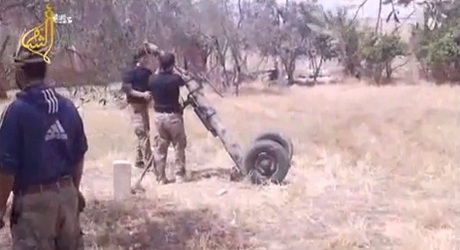 Syrian troops backed by Hizbullah fighters on Sunday entered Qusayr, a strategic rebel stronghold linking Damascus to the coast, a day after President Bashar Assad insisted he would not quit.

The advance came as Assad's opponents warned his regime's "barbaric and destructive" assault on Qusayr could torpedo U.S.-Russian attempts to organize a conference on ending two years of bloodshed in the country.

The Arab League called an emergency meeting for Thursday, ahead of the conference, as the opposition Syrian National Council (SNC) demanded it meet and "stop the massacre in Qusayr".

Forces loyal to Assad launched Sunday's offensive by heavily bombarding Qusayr with artillery and warplanes early in the morning.

Hours later, a military source told Agence France Presse that government forces entered the center of the town, with troops raising the Syrian flag over the recaptured municipality building.

"The Syrian army controls Qusayr's main square in the center of the city, and the surrounding buildings, including the municipality building," said the source.

State television said: "Our valiant troops have restored security and stability to the Qusayr municipality building and surrounding buildings and are continuing to hunt down terrorists in the town."

The Syrian Observatory for Human Rights said regime troops began carrying out air strikes backed by artillery fire against the town early on Sunday, before the group operation started.

"The assault on Qusayr has started. There is fierce fighting between rebels and the army around the entrances to the town," Observator director Rami Abdel Rahman told AFP.

Troops were entering from the south, and fighters from Lebanon's Hizbullah were "playing a central role," he added.

"If the army manages to take control of Qusayr, the whole province of Homs will fall," he said.

The group said the army carried out additional air strikes on Sunday afternoon, and that at least 40 people were killed throughout the day, including 21 rebel fighters.

The regime has made recapturing Qusayr and the surrounding district of Homs province a key objective, and fierce fighting has raged in the vicinity for months.

In recent weeks, government troops backed by Hizbullah and members of the National Defense Forces, a pro-regime militia, have taken a string of villages and reportedly surrounded Qusayr on three sides.

The fighting has spilled over into Lebanon, and on Sunday the country's National News Agency said eight rockets fired from Syria landed in Lebanese territory, without causing any damage or injuries.

Responding to news of the assault on the city, the SNC, a key component of the main opposition National Coalition, denounced the "barbaric and destructive bombing" of Qusayr.

It accused the regime of working with Hizbullah to "invade the town and wipe it and its residents off the map," and called for "an urgent meeting of the Arab League to stop the massacre in Qusayr".

"We say to the countries that are working for a political solution in Syria that allowing this invasion to go ahead in silence... will render any conference and any peace effort meaningless."

The United States and Russia are working to organize a peace conference next month, in a bid to find a political solution to the conflict.

Washington has backed the uprising against Assad, while Moscow is one of his staunchest allies.

But the embattled Syrian leader said in a weekend interview with an Argentine newspaper that he will not resign before the end of his mandate in 2014.

"To resign is to flee," he was quoted as saying by the Clarin newspaper when asked if he would consider stepping down.

The Syrian military was also advancing on other fronts, taking control of the rebel-held village of Halfaya in Hama province, the Observatory said.

In Damascus, a military source said troops were advancing in Barzeh district on the northern outskirts of the city.

The Observatory estimates at least 94,000 people have been killed since the anti-Assad uprising began in March 2011.

Israel's airstrike (by the official air force of the government of Lebanon) or a thousand more like it won't rescue the Western forces seeking to "topple" Assad, and on the other hand, if Israel really wants Assad to stay in power, nobody cares about that, either.

seems naharnet is suggesting that rebells are gays with the picture they are using for the article. Maybe they know it by fact?

Karim - FSA did not kidnap the 2 Christian bishops. The FSA did not engage in wholesale indiscriminate slaughter of women and children. The FSA is not Al Qaeda. Please stop the lies.

Flame too with a dash before his name. He got caught.. They're all the same person.

Christopher the government of Lebanon was created and is controlled Hezbollah, nasrallah himself appointed Mikati. Are you telling us that Israel's air force is Hezbollah's official air force. What are you on son
should I get back to Maine and try to knock some sense into that damaged brain of yours I said try as everyone knows you can't fix stupid.

its all due to he hezb..they control the shia in Lebanon..or i should say hijacked.