Jumblat Says Agreed with Hizbullah, AMAL on 'Principle of Extension' of Parliament Term 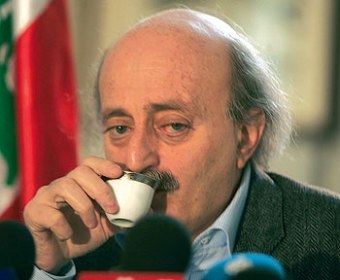 Progressive Socialist Party leader MP Walid Jumblat on Sunday announced that he has agreed with Hizbullah and AMAL Movement on “the principle of extension” of parliament's term, revealing that he has also discussed the issue with al-Mustaqbal movement.

In an interview on al-Jadeed television following a meeting that gathered him with Speaker Nabih Berri's aide Ali Hasan Khalil and Hizbullah secretary-general's assistant Hussein Khalil, Jumblat said the talks tackled means to “preserve stability in the country and the process of extension.”

And as he stressed that “the parliamentary elections cannot be held amid the security unrest in Tripoli,” he added: “We agreed on the principle of extension.”

Asked about his meeting with former premier Saad Hariri's advisors Nader Hariri and Mohammed Shatah, Jumblat revealed that he discussed with them “how to find an acceptable timeframe for extension.”

“A six-month extension is meaningless and we need more than that to avoid vacuum, preserve stability and protect the army,” Jumblat added.

“Who is the madman who wants to stage elections while Lebanese parties are rejecting the entry of the army to Tripoli,” he said.

Jumblat revealed that the PSP will not boycott Monday's cabinet session that will discuss forming the electoral supervisory commission and the polls' financial expenses.

“We will voice our opinion and say we're with extension and against the 1960 and Orthodox (Gathering) laws,” he added.

Asked about the rocket attack on Beirut's southern suburbs, Jumblat said: “I'm not afraid of what happened today because it was an attempt to disrupt security and the state will uncover the perpetrators.”

“Let's try to return to the dialogue table or any form of communication in order to organize the dispute over the Syrian crisis and dispel the ghost of civil war in Lebanon,” he said.

“My remarks over (Hizbullah chief) Sayyed (Hassan) Nasrallah's speech will be sent soon to him in a direct manner,” Jumblat added.

“Some people are acting as if Lebanon is safe from dangers, but let us pay attention to the entire region and protect Lebanon and let us restore security and hope,” he went on to say.

He stressed that “despite the disputes, we cannot but resort to dialogue,” lauding Hariri's phone talks with Speaker Nabih Berri in the wake of the rocket attack.

Jumblat added that the issue of extending parliament's term is “a priority and after that we will calmly discuss the issue of cabinet.”

“Protecting the army is my first concern and I'm seeking stability,” he stressed.

He agrees with terrorists. I'm happy for him. Extending the parliament's term shouldn't be in the table... We need elections to be held in June as planned since 2009 and beyond.

What do you expect from Jumblat? His voting record and back room deals...the guys got the same consistency as FT and dhiarea.

what happens between you and nasrocrap is no one's business..