Wahhab: Cabinet that Commits to International Resolutions Will Fail 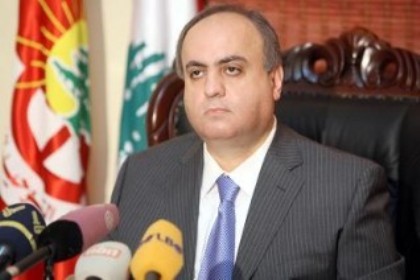 Tawheed Movement leader Wiam Wahhab voiced on Thursday his opposition to the Special Tribunal for Lebanon, stressing that a Lebanese government that abides by international resolutions will fail.

He said during a lecture in Damascus: “Any government that commits to rejecting the violation of Lebanon’s sovereignty and dignity will succeed.”

“Some sides are calling for Lebanon to respect these resolutions, but I think it should first respect commitments to its people before addressing the agreements, especially the STL, which is aimed at destroying Lebanon,” he added.

2 DAYS after cabinet was formed appeared surprises in the way, so all what was told, like Cabinet will respect all and etc,,,,, was only ink for media,
always is important in any topic, to see the post effect, and not hang as FIRST AND UNIQUE TRUE what is told at first time, my questions are:
a) what will wait to Lebanon if the things continue in this way??

Great lecture????
in Damascus
His first statement is:
""stressing that a Lebanese government that abides by international resolutions will fail.""
This is Arabic politics invented in Sudan or other jungles.
Is this politics 101 ????
This is too much to digest ???
Good luck Lebanon.....member of the security counsel ????

First of all, i don't understant why people still listen to this moron! Second of all, look who is talking about violating Lebanon's sovereignty, the moron that believes Lebanon is part of Syria, and defends Syria more than the Syrians themselves do.
Lebanon IS part of the international community, and IS part of the UN, and it is bound to follow and abide by international resolutions!
I suggest that this moron goes home and saves us from his stupid comments, or even better, that he goes and lives in Syria, where he can bark as much as he wants.....

This man must be stripped off his Lebanese citizenship and kicked out of Lebanon. He is a dedicated traitor and disgrace to Lebanon.

We are in Democracy in Lebanon , everyone can give his opinion in politics ..

Minister Wi'am Wahab has the right to accept or refuse , or chose his politic , like your friends from al mustakbal that refuse anything that is not Wahhaby per example ..

I know dear Joe that you have lived the last 20 years with only ONE way and ONE opinion in Lebanon ! the Hariri Saudi Wahhaby way , but these days of your Hariristan are over .. From now on , Democracy , free speech and free opinions are open to all the Lebanese ..

@ le phenicien: man, you should chill with your tone. you have the right to your opinion and to state it, but try to be more dignified while doing it. State the facts that you know are facts, not the ones you wish were facts.

It always wondered me about Wiam Wahhab and Qanso are M.P.s of which country, Syria or Lebanon?
Most of the statments that Wahhab does is either from Syria, as if he represents Syria, or after meeting Nassralah, as if he is a spokeperson of Iran, but his salary gets paid from Lebanon's budget. Every body knows about the bonuses that he gets at the end of the year from Syria and Iran based on his performance as the C.E.O. of Al-Tawheed Movment Corperation. It is amazing!

Mr Wahhab's comment should be posted in the entertainment section, more specifically right after lady gaga news.
The political section is way out of his league

Democracy and freedom my dear friend Le Phenicien are treasures which must be well guarded and cherished. Wahhab's political history has been strictly oriented to bringing back the Syrian regime, which is undemocratic and dectatorial regime, to control Lebanon. Abusing democracy will only lead to chaos and anarchy and thats precisely what people like Wahhab would love to see. In fact, he should be court martialed for being an agent for a murderous regime.

This guy seems to be the most scared of international resolutions from day 1. I just wonder!

Instead of talking about the violation of Lebanese sovereignty, he should go and help his friends in the country next door survive a revolution. Also the 'Tawheed Movement' is him alone, you can't have a movement with one person...what a joke.

Syrian baasist puppet,not to be taken seriously and should not get much attention,more of a clown.

Is it all about money or fear of being assasinated? puppet.

dear elias... letters V and B are not interchangeable..