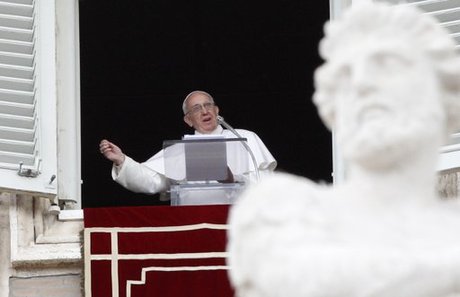 Pope Francis on Sunday appealed to "the humanity" of kidnappers in Syria and urged them to free their hostages, expressing deep concern for the kidnap victims of the two-year-old conflict.

"I appeal to the humanity of the kidnappers and for them to release their victims," the pope told a large crowd as he delivered the Angelus prayer on St. Peter's Square.

In late April two Orthodox bishops were kidnapped in northern Syria, though the pontiff did not make any specific reference to their case. No group has claimed responsibility for their abduction.

The pope said he was deeply concerned for "the defenseless population" caught up in the fighting in Syria, where over 90,000 people have been killed since an uprising against President Bashar Assad began in March 2011.

"The plight of war brings with it tragic consequences: death, destruction, enormous damage to the economy and the environment, and the scourge of kidnappings", Francis added.

"Let us pray for our beloved Syria," the pope said from a window in the Apostolic Palace, to warm applause from the thousands of faithful in the square.

There has been no news on the whereabouts of the two bishops, Yohanna Ibrahim and Boulos Yaziji, who were reportedly taken near the rebel-held town of Kafr Dael, near Aleppo.

Their disappearances were the latest in a string of kidnappings in Syria that have also included political figures and reporters.