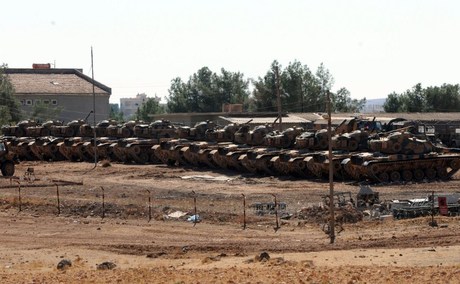 The Turkish army returned fire after shots were fired at military targets from across the border with Syria, the military said in a statement Tuesday.

"A group on the Syrian side of the border fired 60 shots at an armored personnel carrier and tactical vehicles... which was reciprocated in kind" late on Monday, it said, adding that there was no damage or casualties.

The Syrian shots targeted a military post in the Narlica region of Hatay province near the Syrian border, it added.

The Turkish army fired 50 shots in return, according to the army statement published online.

Turkey, a former ally of Damascus, has become one of the fiercest critics of President Bashar Assad's regime after his deadly crackdown on a popular uprising erupted in March 2011.

It backs the rebels fighting against him and some 400,000 Syrian refugees have fled to Turkish soil.

In October, shells were fired from across the border and landed in a Turkish town, killing five civilians.