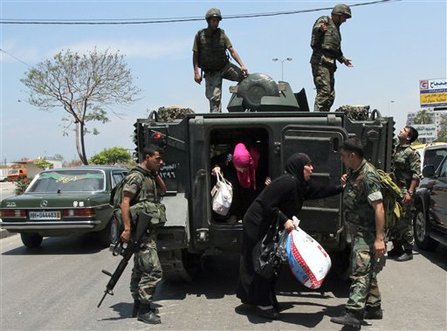 Arab Democratic Party media officer Abdul Latif Saleh announced on Sunday that the party is fully cooperating with the army and will felicitate its deployment in the northern city of Tripoli.

According to the state-run National News Agency, the army will intensify its presence in Syria street, which separates the Tripoli districts of Jabal Mohsen and Bab al-Tabbaneh, and will set up new checkpoints.

The news agency said that the residents of Bab al-Tabbaneh and Jabal Mohsen will cooperate with the army to remove the barricades and sandbags from the the rival neighborhoods.

Although Lebanon has officially adopted a position of neutrality in Syria's war, its people are sharply divided with Hizbullah and its allies backing President Bashar Assad's regime and the March 14 alliance the rebellion.

The army urged on Friday "citizens to express their political views on events in Lebanon and Syria by peaceful and democratic means and not to be driven by groups wanting to use violence as a means to achieve their ends".

The statement was the strongest from the Lebanese army since the uprising against Assad erupted in March 2011.

It came as another bout of fighting broke out in central Tripoli, killing one person and wounding five others.

The Syria-linked clashes between Sunni and Alawite residents has killed at least nine people since last week, bringing to dozens the death toll over recent months.

God take down Hez Ebola.... A faction that uses a Russian made weapon as a logo made in 1947. Even god is hijacked by these people. May god forgive these terrorists and their dumb sympathizers.

Cool! Now they can shoot at each other without barriers, western style!

Common sense says based on our politicians, i.e Nasrallah. If HA a Lebanese militia controlled Qusayr for the Syrian Army then Baab El Tabeneh militia should control Jabal Mohsen for the Lebanese Army.
I do not see a difference between the two cities.

Why not then JMohsen militia control BTabbaneh for the Army? The names copyright © 2013 All rights reserved!

@saturn: simply because you have the rest of Tripoli which is mostly behind BTabbaneh militia.

That does not explain the logic behind who should control what and for whom. I'm sure residents of Qusair would by now mostly be behind the old ways of life.

The difference is that Salafists are killing Lebanese soldiers all over Lebanon, Lebanese Alawites are not.

should they be merely removing barricades? not better remove weapons?