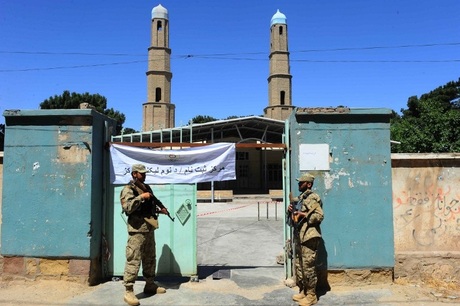 Donor nations funding Afghanistan's recovery on Wednesday piled pressure on the government to pass election laws seen as crucial to proving the 12-year war and billions of dollars of aid money have not been wasted.

The laws, which will determine how April's presidential election is run, have been delayed for months in parliament, and the international community is increasingly concerned that the poll's credibility is at risk.

"We cannot stress enough the importance of a successful and democratic political transition next year and a credible and timely election," the United States said in a statement at an aid meeting in Kabul.

"We urge the Afghan government and parliament to take the next critical steps and pass electoral legislation that provides for credible appointments of electoral officials and an independent complaints process."

The head of the U.N. mission in Afghanistan Jan Kubis said that "any further delay seriously risks jeopardizing" preparations for the presidential election, which is scheduled for April 5.

Hamid Karzai, who has led Afghanistan since 2001, is due to step down after his maximum two terms as president, with a new leader taking over in the country's first-ever democratic transfer of power.

But the last election in 2009 was marred by massive fraud, and the international community fears that another flawed poll would wreck claims that the costly military and aid effort in Afghanistan has been worthwhile.

Donor nations and the Afghan government met on Wednesday in Kabul to assess progress one year since an international conference in Tokyo pledged $16 billion of aid to the country on condition of widespread reforms.

After the meeting, a joint-statement declared that the "the Afghan government and the international community agree that credible and inclusive elections are profoundly important".

Reforms to the Electoral Complaints Commission, which threw out one million fraudulent votes in the 2009 poll, are a key concern for donors, with some fearing parliament may approve legislation that actually weakens the watchdog.

A corrupt election and a contested result would undermine efforts to establish a functioning state in Afghanistan and could even lead to another era of civil war as Taliban rebels fight to regain power.

No front-runners have emerged for the election and it remains unclear who will campaign to be the next president.

Among a long list of possible candidates are Qayum Karzai, the president's brother, Omar Daudzai, a former chief of staff, and warlord-turned-governor Atta Mohammad Noor.

"It is of utmost importance that credible, inclusive and transparent elections take place on 5 April," Mark Lowcock, the British representative, told the meeting.

"We need to see the two election laws pass through parliament before recess on 22 July. If this does not happen it would raise serious questions about the quality and rigor of the elections preparations."

Karzai, who came to power soon after the Taliban were ousted, has repeatedly said that he will leave office in line with the constitution and has vowed to work towards a fair election for his successor.

But progress has often been slow and the aid money pledged in Tokyo was designed to be strictly conditional on the Afghan government's achievements.

"I can't see any indications that the discussions at Tokyo last year affected the government's behavior, and I blame the donors squarely for that," said Heather Barr, Afghanistan expert at the Human Rights Watch campaign group.

"They made a lot of noise about accountability and then failed to follow it up with any teeth."

Vygaudas Usackas, the EU ambassador in Kabul, said that with 100,000 NATO troops withdrawing next year, "the Afghans can't afford to continue with business as usual".