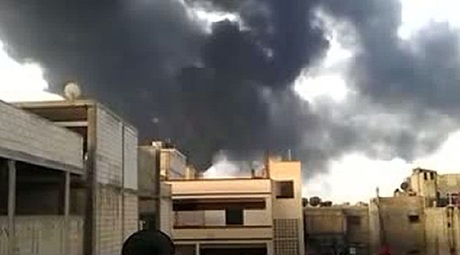 Explosions rocked several army ammunition depots in the western Syrian province of Latakia on Friday, possibly after they were targeted with rockets, the Syrian Observatory for Human Rights said.

Observatory director Rami Abdel Rahman said there were reports of deaths and injuries in the blasts but he had no further details.

"Explosions around dawn today rocked an area... in the east of Latakia apparently as a result of blasts in ammunition depots near a brigade of regime forces," the Observatory said in an email.

Abdel Rahman said there were indications that the blasts were caused by rocket fire targeting the depots, but that there was uncertainty over who was behind the attack.

Elsewhere in the country, the Syrian air force carried out at least three raids on besieged sectors of the central city of Homs, where troops have been battling to roll back rebel forces.

The Observatory reported heavy shelling on Khaldiyeh district and the Old City of Homs, adding that regime forces backed by the National Defense Force militia and members of Lebanon's Hizbullah were fighting rebels on the outskirts of Khaldiyeh.

The group said eight regime forces were killed in fighting on Thursday in the two neighborhoods of Homs, which have been under siege by the army for more than a year.

At least 106 people were killed in fighting throughout Syria on Thursday, including 38 civilians, 46 rebels and 22 soldiers, according to the Observatory.