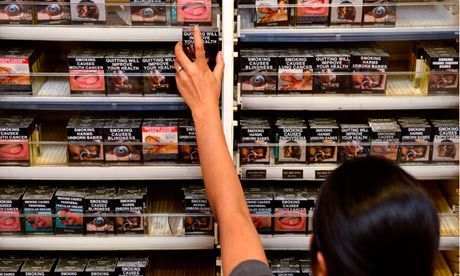 Britain on Friday announced it had postponed plans to introduce plain packaging on cigarettes, saying it was waiting to see the results of a similar move in Australia.

Prime Minister David Cameron faced criticism over the move, with opposition lawmakers asking whether the decision had been influenced by links between his chief party strategist and tobacco companies.

Health Minister Jeremy Hunt said the decision was delayed because the government wants more time to see how a similar system in Australia works before committing to such a policy.

In December 2012, Australia became the first country in the world to force tobacco firms to sell cigarettes in identical, olive-green packets bearing the same typeface and largely covered with graphic health warnings.

The British government is reported to be worried about the impact on jobs in the tobacco industry that any ban on branded packaging might have, especially at a time of austerity and economic stagnation.

Diane Abbott, health spokeswoman for the opposition Labor party, told parliament the government had made a "disgraceful U-turn".

"We have to ask, what happened? We suspect Lynton Crosby happened," she said, referring to the election strategist for Cameron's center-right Conservative party.

Cameron's opponents have pounced on reports that a public relations firm run by Crosby, an Australian national, had previously acted for tobacco firms opposed to the Australian plain packaging move and alcohol companies which reject minimum pricing.

"The prime minister has never been lobbied by Lynton Crosby on cigarette packaging. The important point to stress on this issue is that Lynton Crosby has had no involvement in the decision," the spokesman told reporters.