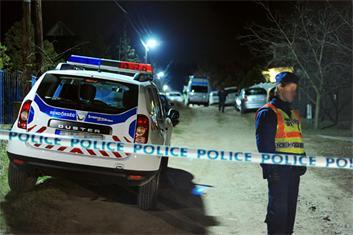 Hungarian police began evacuating around 10,000 people in the central city of Szekesfehervar on Thursday after a World War II bomb was discovered next to a kindergarten.

The 100-kilogram (220 pounds) Soviet-made bomb was found near a kindergarten sandpit in a densely populated housing estate in the city of 100,000 people, some 65 kilometers (40 miles) southwest of Budapest.

"It's rare to find such a large bomb in an inhabited area of Hungary these days," Dancs said.

Cities and towns across Nazi-allied Hungary were bombed heavily during the final months of the war by U.S., British and Soviet forces, with Budapest in particular carpet-bombed on 37 occasions.

Many unexploded devices were buried in the ground and are often uncovered during construction work, leading to 14 evacuations in the capital since 2008.

On Wednesday police evacuated around 1,500 people in Budapest after a bomb was found during construction work at an apartment block near Buda Castle.

All the bombs have so far been secured without damages or injuries.