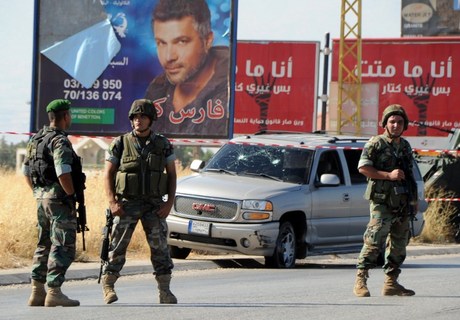 The Qaida-linked Abdullah Azzam Brigades on Thursday claimed responsibility for Tuesday's roadside bomb attack on a Hizbullah convoy in the Bekaa, vowing further attacks across Lebanon.

“We are the Abdullah Azzam Brigades. As part of the operations we have been recently staging in Lebanon … we targeted Tuesday a car belonging to one of the leaders of the Rafidah (a derogatory term for Shiites) in Majdal Anjar after we received information that the aforementioned car was carrying one of the leaders of Hizbullah and a number of their Iranian partners,” the group said in a statement.

“This operation is a message from us to Hizbullah and its Iranian masters,” the group added.

“As long as you continue to slaughter our children and brothers through your intervention in Syria, we will perform our duties and we will not stand idly by,” it said.

The group warned Hizbullah that Tuesday's attack was only one of the series of operations “that will be staged across Lebanon against Hizbullah and its Iranian associates.”

It vowed to turn the Bekaa region into a “river of blood during the month of Ramadan if Hizbullah does not immediately end its intervention and withdraw from Syria.”

The group also noted that operations against Hizbullah will not make it forget “the duty of liberating the holy land from the hands of the Jews.”

On Tuesday, a bomb hit a Hizbullah convoy traveling towards the Lebanese border crossing with Syria, killing one person and wounding three others, according to Agence France Presse.

The bombing is the fourth time that a vehicle has been targeted by an explosive device in the Bekaa region, which is a stronghold of Hizbullah.

On July 7, three people were injured, including two army troops when two bombs exploded in the area.

That attack followed a similar blast on June 28, when two small bombs hit a Hizbullah convoy in the area, detonating as four cars passed, a security source said.

But in a speech in May, Hizbullah chief Sayyed Hassan Nasrallah said his party will stay involved in the Syrian conflict, after having helped government forces recapture the key town of Qusayr from rebels.

"Where we need to be, we will be ... To defeat this very, very dangerous conspiracy (against Syria) we will bear any sacrifices and all the consequences," said Nasrallah.

"The alternative (to the Assad regime) is chaos and the rule of these groups," he said, referring to extremist Islamist rebel groups he said were part of an "American-Israeli-takfiri plot."

The conflict, pitting a Sunni-dominated rebel movement against Assad, has raised sectarian tensions in Lebanon and Lebanese Sunni fighters have also been killed while fighting alongside Syrian rebels.

Funny they fight and they fight and every time they make a speech whether Hizbullah or Al_Qaida, they always mention Jews and Zionists... What a bunch of losers.... If all the ammunition that Arabs spent killing each others with, had been spent firing at Israel, Palestine would have been liberated a long time ago... But again that is what losers do...

iranpatriot,
God gave you so much beauty, and gave others all the brains.

by this standard helicopter you must be extremely handsome, you should consider a career in modelling!

and regarding the "abdullah azzam el 3azim makhtoum kaboun jubhat el liwa el ansariya el machnouk al kabir brigades of victory for combat in the levant, the middle east the world and beyond", if they insist on the river of blood, they should know they will irrigate it with their own blood

Well said, well put. I have read Lebanese newsites for over 4 years now and have always wanted peace between Israel and Lebanon but if you look at the amount of deaths of Lebanese since 1967, it is almost 400% more by the Syrians or internal fighting than Israel. I truly wish the was a ONE Lebanese "Army". May peace be with Lebanon and Israel.

Lebpatriot..your an idiot.. it takes two to start a war.. its karama.. for years hezbollah has been bullying the lebanese population and our neighbours. Rememeber who started this.. HEZBOLLAH..

yes, HA bullied our neighbors, the israelis. this is why they cooked up this plan with their saudi oily kings to punish HA with their holy throat cutters.

My prediction (every naharnet commentator has to make one eventually)... The jihadists are getting kicked out of Syria, so they're coming here.

Love lebanon or leave it...Get the hell out of Lebanon everyone and take away your filthy wars with you from our scred land.

lol you got a point there ;)