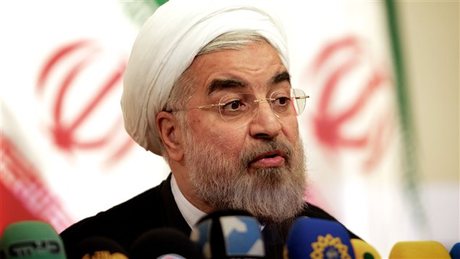 "Rowhani sent a cable to Hizbullah chief Sayyed Hasan Nasrallah in which he praised the efforts of the party's cadres in their resistance against Israel,” the Iranian Mehr News Agency reported.

Rowhani expressed that Hizbullah and its chief “are the hope of the Lebanese and Palestinian people for victory against Israel,” the same source added.

His letter to Nasrallah comes after the Hizbullah chief congratulated in a cable the new Iranian head of state on winning the presidential elections.

European Union foreign ministers on Monday decided to put the military wing of the Hizbullah on its list of terrorist organizations despite Lebanon warning against such a move.

However, EU representatives assured that they plan on continuing dialogue with different factions in Lebanon, including the blacklisted party.

The Head of the EU delegation, Angelina Eichhorst, said on Tuesday that the decision to blacklist Hizbullah's military wing would not affect the cooperation with the new Lebanese government even if the party had representatives in it.

"Jihad" = Holy War.
When was the last time the Hizballah heroes fired a single shot into Israeli territory during their "Jihad".

Exactly who is the idiot.
We all know when it was, it was a rhetorical question to emphasise that Hizballah has done nothing that supposedly it was set up for, and refuses to integrate into the army, for 7 years.

Iran'a mollahs are today head of the list of Lebanon's ennemies. Lebanon, free, sovereign prosperous state has many ennemies listed below, by order of harm they mean to our lebanon as we see it: free, prosperous and sovereign.

who sends a cable these days--email, sms, pm, im or even a phone call. what's the deal with a cable?

Rowhani expressed that Hizbullah and its chief “are the hope of the Lebanese and Palestinian people for victory against Israel,” the same source added..................
This is an illustration of a moderate president produced by Iranian Democracy. With moderates like that who needs radicals?

Lets all pray for peace in Lebanon.

Why doesn't he go jihad himself with his Iranians subjects? Oh! sorry I heard they are busy hiching rides on cheap boats to Australia!

Rowhani, do us all a favor and recall your militia. You and Nasrallah can do all the “jihading” you want from Iran!

has anyone noticed lately that Hizbo is calling everyone "Israel"?
has anyone also noticed that he is fighting everybody and everyone except Israel?
has anyone noticed that after 2006 war Israel has been sleeping like a baby? and the problem became inernal Lebanese? itsbecoming a state within the state and killing everyone who doesnt agree with him?
In this world there are 2 countries for those ignorants Iran and Israel.