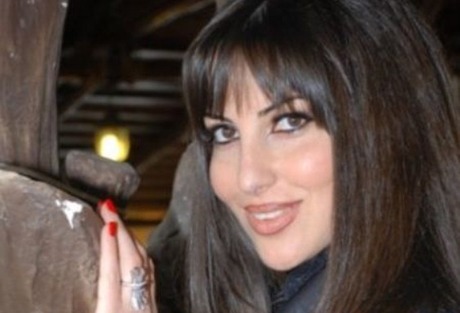 In a dramatic video that has shocked the Lebanese society, Amena Ismail is seen sitting on the balcony ledge of her eighth floor apartment before jumping to her death as her husband desperately tries to convince her not to commit suicide.

“Your mother does not deserve this … you can forget about me if you're not happy with me ,” the husband, Kifah Fairouz Ahmed, tells his wife in a weeping tone moments before she throws herself from the building that is located in the upper-class Beirut district of Ramlet al-Bayda.

LBCI television said the video was leaked by a policeman after Kifah handed it over to security forces.

Media reports said Kifah is a diamond businessman, noting that he had returned with his wife Amena from Belgium only days before she committed suicide.

The video was first uploaded to YouTube by civil society activist Louna Safwan.

Al-Jadeed television quoted a source close to Kifah's family as saying that the couple had a good, harmonious relationship and that they were married around six months ago.

Reports said Kifah was released on bail on Tuesday morning after a brief detention and video footage showed him taking part in the funeral in the southern city of Tyre.

I don't know why FlameThrower gets so many thumbs down for every comment regardless of what he says. I don't think based on this video alone we can point fingers at the husband. It's not like FlameThrower said Hezbollah only keeps weapons for Israel resistance. Save your thumbs down for that :)

lol yea bezona definitely gets too many thumbs down, i'd suggest we give him thumbs up his ... ;)

Let who rot and why? I have not yet heard Dr. Arreet 7akeh predict who the culprit might be this year, and honestly I personally cannot wait until 2014 to hear what his updated prediction will be in this regard. And now that allouchti is nowhere to be found and the savant GabbyMarch14 is focused exclusively on the perpetual fall of the "ASSad" regime every Wednesday, we are at a loss!!! RIP, common sense and humbleness.

«The video was first uploaded to YouTube by civil society activist Louna Safwan.»

I hope Luna Safwan will get jail time too. Uploading it to the web is a disgrace to the late victim, the surviving husband not to mention her family.

Activism is good, but this video is voyeurism. It's not constructive. I'm disgusted.

So you're going to throw mud at everyone involved? What the hell is your problem, benzona? If Louna Safwan did not upload it someone else would have. Naharnet just posted it on their web site, and so did pretty much every media outlet. Are you going to accuse them too of being disgraceful? A woman committed suicide, it happens all the time, may she rest in peace, and the rest of us have had this uncommon yet troubling privilege to watch her do it on video. We don't need to go insult everyone involved!

I'm scratching my head on this one . Who in their right mind would video tape ones' wife suicide jumping from the 8th floor? Was she given anything before the terrible act ? How conviniance it was for the camera to just be so accessible at a crucial moment ? If he had the time to bring out the camera why did he not go and call the neighbours just beyond his front door ? Why was it so important to capture it on camera ? Who did he want this bad episode so desperately to see it & why?
I think there are too many questions than answers. There should be an autopsy including toxicology report as well as an investigation into their background ! The picture then should start to come out.

they were married for 6 months only. Apparently the husband was not treating her well..... Rest in Peace Amina. The video is sick.

Si, there must have been some oddity in their relacionship. perhaps he forced her to do not so catholic things.... u know wat i mean.

I hope Naharnet will follow up on this story.

True colors shine again, scumbag, you will always be.

Booo hooooo. There are people living in poverty and hunger in the same city I live in. All they want is something to eat and freedom to live in peace while I get to live in a life of luxury and travel on holiday to foreign nations. My life is sooooo terrriiibblllleeeee. *jump*

it's probably a homicide that he's trying to disguise as a suicide. why would he be filming at that point? and the movie doesn't continue to see her fall. And you don't see her face clearly. The movement of the camera doesn't look natural either. I think this is definitely homicide, not suicide.

It is clear that she's either mentally disturbed or under some heavy medications. You can not in no way be this calm when you are suicidal. Yes, people that are convinced suicide is their only way out are usually calm about but not THIS calm.

In either ways my sincere condolences. Also, to the smart ones that said he should've called the authorities what would they do? We have the most inept police department ever. I highly doubt they even have a psychologist on staff that would've worked with her.

another suicide expert with a PhD in psychology and behaviorism

Definitely a homicide that he's trying to disguise as a suicide. He should stay in custody longer while they analyze the body. Very classic story, where the husband is usually the killer.

Her husband was deported from Belguim for being Hizbollah supporter.

No way, it was a zionist American scheme. Right M8er?

what a loss, I feel sorry for her family. RIP

I'm sure she was going through a terrible phase, but she also likely had mental health problems.

It is certainly odd that the husband was filming it, but it'll sure come in handy because you have to admit "my wife threw herself off a balcony" would have been suspicious to the police.

He was probably filming the apartment or the view or some such. The camera's obviously dangling or at least inconspicuously in his hand as would be the case if you were filming something and you saw that scene. Knowing of the physiology of acute stress his hands would make for a tighter grip instead of letting the camera fall.

Eh, obviously some sort of mental health problem as is usually the case with suicide(e.g. clinical depression, bipolar disorder, schizophrenia, suicide-fantasizing tendencies and the like).

At least for me, the man's pleas were seemingly genuine and well, the best we could have done I suppose.

Please people,before judging or jumping to any conclusion,i would like to clarify some facts here.
First of all,the question of how he happened to be filming is because it's a new apartment(as you can see the lack of glass on the balcony where she sat before jumping) that he had just bought and he was over with his late wife overseeing the renovation while filming around and taking pictures when he noticed his wife had gone out.
Now there maybe some issues with her (mental or otherwise).
Her elder sister had also committed suicide as i know.
What had transpired between her and her husband God only knows.
The above stated are facts i know from a very close relative of the husband who is in daily contact with him.
I also met him briefly at one time.So until the autopsy is done and revealed if she was on heavy meds(which i suspect due to her calmness and indifference about the act she is committing),all we can say is R.I.P..and may God forgive her poor soul.

autopsy revealed no drugs found in her system

wow you guys seem to be experts on suicide, i'm guessing you have a hollywood degree?

Add this to women rights in Lebanon! some are killed by their men and some others are played by their men to commit suicide!
This women has been clearly pushed into this suicidal state of mind!

The video is quite sickening and should be removed from all websites.
There's no excuse for suicide, but no one knows what was going on between her and her husband. I can only feel for her family at this time.

It is clear that she is under the influence of a substance that has impaired her reactions. It almost appears like she was dipping into a pool. It seems also there is a 3rd person with them as the Shadow is moving faster than the camera motion plus his other hand is holding an object whilst the other is in his pocket.

We are in a time where we have to capture everything on film rather than act! the effect of social media

my guess is : the husband put her under a lot of pressure day after day and she seems to have a problem ... and the husband videoing all this to prove his innocence before she even jumped! sometimes to can push someone mentally to suicide and this is what happens, the husband cries and shouts etc are fake

watched the end several times, pausing it when we see the shadow.

actually only a couple of frames show a weird shape extending from his hand. frames before and after show an empty hand. could be just a glitch

Does the husband not sound a bit too effeminate? I sense a betrayal on his part but not with another woman, which would be a doubly-shocking matter to a troubled wife who probably thought she married a man's man.

he filmed her so that he'll have proof that he didn't kill her.

i think its the phone he was using that shows in the shadow.. this video is very disturbing

The full vodeo is just below 2min length, it shows the husband filming the appt rooms that were under work until he noticed her sitting on the edge of the unfinished balcony. He had the life saving reflex of continuing filming while trying to reason with her. You never rush towards someone in such cases. He was known to the wifes own family for his kindness to her and the very fact none among them ever doubted his version is proof of his innocence. Unfortunately the girl experienced early trauma related to a missing father who was put early in a mental institution and she suffered chronic depression

i hope shes finding peace in another place now far from this cruel life, that she prefered not to live, she found nothing is worth to make her face such world, not a husband that kept taping his wife commiting suicide instead of running to catch her, not a father who sexually abused her sister.. nothing did make her stay, must been difficult what she passed through and all my respect to her may she now be resting in peace the peace the became hard to find in this world

Hello I don't understand why wasn't my coment posted?

My guess is that the husband was abusive.

He intimidated her into killing herself and filmed it as well as his "dramatic" reaction in order to use it to "show his innocence" if he was accused for it.

Knowing how much domestic violence goes untold in Lebanon, my theory isn't too far fetched!

Have you even gotten your head out of your ostrich hole to notice that not one, not a single member of her family, close or far, not one of her many friends and acquaintances ever stood up to denounce a supposed case of mistreatment that drove her to commit suicide? But no, you want the world to take your wishful thinking as a reality instead of considering the facts.