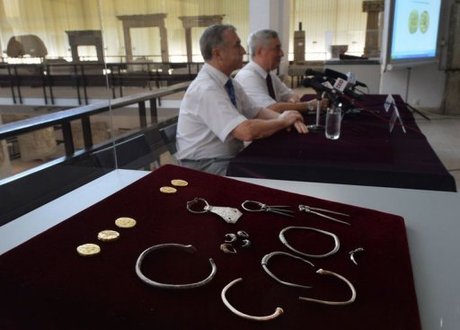 Romania recovered gold coins and silver jewels dating back to the first century BC that were stolen from the site of Sarmizegetusa Regia, the capital of the ancient Dacian people, the national history museum said Tuesday.

"The recovery of five coins and 14 pieces of jewelry is the crowning of more than two years of efforts made by prosecutors, policemen and by Romanian and German experts," the museum said in a statement.

The coins, from the era of king Koson (1st century BC), were stolen from Sarmizegetusa between 2004 and 2007, museum director Ernest Oberlander-Tarnoveanu told Agence France Presse.

He said that both the coins and the jewels were recovered from a German auction house.

Since 2007, Romania has recovered 13 golden Dacian bracelets and more than 500 gold coins plundered from archaeological sites.

The Dacians, an Indo-European people conquered by the Romans in the first century AD, are the ancestors of the Romanians.

A man charged with "complicity to the theft of cultural goods" was arrested Monday, prosecutors said.

The suspect, Horia-Camil Radu, had been indicted in 2008 but fled Romania before the trial began.

In 2010 he was arrested by British authorities while he was heading to Germany where he planned to sell 160 Dacian, Byzantine and Roman gold coins.

Tests conducted by British Museum experts showed that 145 of the coins were part of a Dacian treasure stolen from Sarmizsegetusa, an UNESCO heritage site.

The coins are to be sent back to Romania soon, prosecutors said.