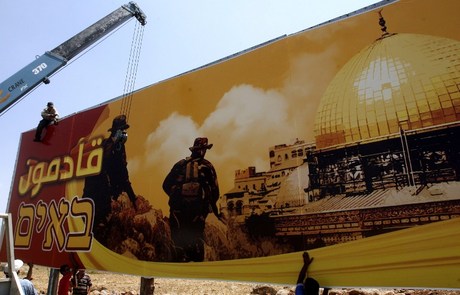 Hizbullah has set up a large banner near the border with Israel with the phrase "we are coming" in Arabic and Hebrew, the state-run National News Agency reported on Thursday.

"The banner was placed at the western side of al-Wazzani river mouth, near the border with Israel,” the NNA detailed.

"This took place on the eve of Hizbullah's celebration of al-Quds Day."

In the meantime, Israeli military activity was registered in the South as Merkava tanks were spotted in the region facing al-Wazzani area.

"An Israeli military delegation was roaming the area and some of its members used endoscopes to watch Lebanese territories.”

Israeli air force also flew at a medium altitude in the South over the towns of Nabatieh and Iqlim al-Tuffah.

As a response to the Israeli activity, army and United Nations Interim Force in Lebanon troops were heavily deployed in the area.

Hizbullah is set to celebrate al-Quds Day on Friday near the technical fence in the southern al-Wazzani, during which the party's leader Sayyed Hasan Nasrallah is expected to give a speech.

BREAKING NEWS: Hizbullah contracted with Dr. Ahmad Fatfat, aka the Tripolitan Sanni spokesperson of Hariri's al-Qaeda - Northern Brigades, to be the exclusive tea sommelier to soothe the Israelis while they get their butts kicked and whimpering like little girls. Don't you love al we7deh al wataniyeh?

Looks like an ad for Marlboro.
Come to where the flavor is. Come to Marlboro Country.
Stupid inbreed militia

Scum of the Earth and its Jerusalem by the way not Quds,
Partition please.

I bet the Israelis are going to answer with a sign " Come on then, what are you waiting for ?"

OMG - I have never laughed so much! Just do it already, go and free Palestine and stop BSing us

As I recall, the only one crying last time was Siniora! Get your facts straight buddy!

You guys are all stupid! no wonder Lebanon will never advance ...Shame on you all...where is the love for your country?! Now I understand why my Dad moved us to the USA in 1977.....

Some Resistance. Just what is it that they are resisting anymore??? The 8th Century? They must because the 8th will lead to the 9th, 10th etc until, God forbid, they get to the 21st Century,and then, all will be lost to Hezbollah. They need to take their Mehdi back to the Mosque and wait for him there. Christians are waiting for the Second Comming of Christ in our Churches knowing that we know neither the day or hour, we wait on Gods time. For Hezbollah to think that it can cause the Shia version of the rapture to happen by their own hand is a usurpation of Gods decision,so it is blasphemy

Really to name yourself the "party of God" is blasphemy. God is not a partisan, and if he were then only God can know the mind of God to select a partisan group. For Hezbollah to declare themselves as "God's Party", on their own authority is to take the name of God in vain and is blashpemy.

God should not be in politics, though politics should be practiced by those with a healthy respect for God.

WoW! Now this is an impressive act of resistance!!

They are coming... but from which side??

It does look like a Marlborough ad.. with the cowboy hats . . . lol

I hope they go there, and Israel will flatten the South for them (don't get me wrong, I feel bad for civilians). The the Lebanese army closes all roads for escape with one condition. If you want to run and hide and protect yourself, leave your weapon at check point and pass. Otherwise, stay there and fight Israel since you've created this shit for us.

I think that's simply meant to say that HA will not be deterred by the EU's ('zionist') decision and will continue to press ahead with protection of the Zainab mosque.

When sir, was the last time Israel declared war on Lebanon?
In 1948, it was the combined armies of the Arab States which invaded Israel, in the first "Lebanese" War it was Israel against the PLO, and the second "Lebanese" War it was Israel v Hizballah. The loyal Lebanese Army was hardly involved in either of these two wars.
So I very much doubt that Israel is going to break a 65 year old tradition and decide to declare war on Lebanon. I'm quite sure that it would much prefer a peaceful, secure and economically sound Lebanese friend on its northern border.

how come they didn't label the person who wrote in Hebrew as " traitor" ? lol

dear circassian,
I would love to invite you to my house for iftar and we sit down and discuss truth in the Christian faith. Reply here if you are interested.
God bless you

where did they get the money to erect such a sign. I bet someone high up in the hizb has a friend who owns a sign making company and he wanted to boost his income for ramadan.

What else could it be. Millions before hassan naslrallah and his masters mullahs yelled Kademoun and still exactly where they were.

How about suporting the entity called the LAF and the slogan of the president of the Republic (read it below)
Suleiman Says Only State, Army Should Decide on Defending the Nation

You just summarized the story of a 1400 years of bloodshed.. in 3 sentences.

more propaganda for their minions after their party is getting blacklisted everywhere.

and you wonder why hizb iran doesn't like to educate its masses but rather indoctrinate.

One can easily tell that the Lebanese-Iranian terrorists are uneducated. They didn't go to their geography classes. They think israel is near Turkey.

Nasrallah speaks via telecast and now Hizbullah is Resisting via billboards :-)

patriotism is a devotion to one's country roar... not to one's sect!

Pretty much sums it all up.

Nice to see some love being spread... Now if u could just leave the religion out of it, it'll b great.

Because it would no longer exist. Joining the army is a defeat for HA. Anyway, we should prolly address the root of our problem, before trying to tackle the side notes.

Also, they already have their say, or more, in politics. They control the army. The question is why would they give up their weapons?

You're asking a resistance group to give up their resistance, hand in their weapons to a gov that is 50% on the side of the west (Israel), and hope for the best?... The Shia were ignored until Iran set up a militia here, now they are the least ignored, y should they give that up? Shia r under-represented in gov... Are the Christians ready to give up some power for the greater good?

No of course not, I'm just stating facts, HA is in charge, why would they give this up? And realize the words, give up. What's to make them give up their weapons?... All I want is a booming tourist country, money flowing, and no militias, or Ba'ath, or SSNP!... But to think that HA will give up their weapons and the authority over them, while Israel does nothing to change, is a bit naive.

Before HA, Israel marched right into Beirut... Last time they couldn't hold bint jbeil. The Shia use to be ignored by the gov, now they control most sensitive sectors (military intelligence, ports, telecommunications). They are the strongest militarily, and the soon-to-be largest sect. We need to realize this. They're under-represented in gov.

As for the christians, I meant that the only way to give Shia more representation in gov, is by the Christians giving up some of theirs. I guess it makes sense what aoun is doing, if u if think of it that way, he's pretty much giving up Christian seats to Shia decision makers. The Shia were always ignored by the government, we can't expect them to just hand in the weapons without something to compensate. It's tough decisions, I'm guessing that's why they are never made.

Also I think integrating HA in the army is a bad decision. They would take it over. Just like the bright idea of inviting them to government.

Blasphemy !!!! bbastard00
Why would you write " Signed God " !!!!
Blasphemy , devil worshiper , no intelligence , low IQ , raised in a dysfunctional family , probably without a father or a mother , raised on the streets , definitely not of Lebanese origin lak Tfeh !!!!
Signed Wolf ....

You're using bible scripture, wrongly, to argue a political stance... And I'm stupid?

because the history of Christ based on Egyptian mythology is better

if the takfiris attack like they did, they'll get whooped all the same, it's not like there's some hidden rule that says HA should let everyone attack it without responding unless it's israel.

hehehehe yea, there's so good at it that when they post a photo israel goes into panic mode, sends out mirkavas, a delegation and the air force :)

Hahahahahahaha these naharnet moderators are the best! They ruined any chance of having a debate... yet they keep the trolls.

"We are coming". That's what she said! Yallah, the Hizb have been coming all the way for 31 years now. 'lzil7feh kénit wouslit.

Israel Can simply say ...
Qawook!!! We are comming to :)
My question is who is provoking who now. We want to see Hizbolah fight with Israel Alone ... and not involving innocent Lebanese... and than it will interesting seeing the results.... but neither Israel nor ghizEbola plan to put avoid us from their fights. HizEbola Enough.