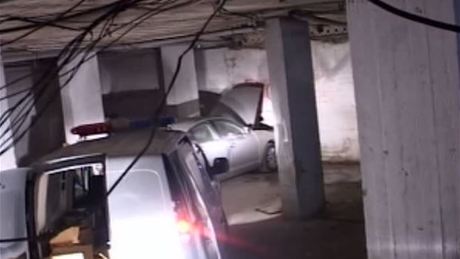 At least three people detained by the General Security Directorate confessed that they were planning to detonate a booby-trapped car found in Naameh neighborhood in South of Lebanon in another location.

Information obtained by Naharnet on Sunday showed that the confessions of the car-bombing ring helped the security agencies seize the car parked in Naameh neighborhood.

The members of the network revealed that the car, which was rigged with explosives, was set to be detonated in another area.

Saturday afternoon security agencies seized a car filled with 250 kilograms of explosives near the municipality building in Naameh.

The Audi car carrying fake license plate numbers contained five barrels of TNT, explosive material, fuses and detonators were found in the car along with a device to remotely detonated it.

The Lebanese army and Internal Security Forces swiftly cordoned off the area.

The state-run National News Agency later reported that the gang, which is formed of four members, confessed that they belong to a network which was planning to detonate several cars across Lebanon.

Later on Sunday, the ISF announced that among the seized material from the explosive-laden car were "five kilograms of an unknown explosive substance" and that a lab test was underway.

In the evening, the army encircled the al-Zaatari and al-Mrah neighborhoods in the town of Haret al-Naameh and started searching the house of the detainee Mohammed al-Ahmed and the houses he used to visit, NNA said.

Troops were also inspecting cars parked in the area in search for explosives, the agency added.

Earlier, al-Jadeed television said the army raided the house of al-Ahmed's wife in Haret al-Naameh and that a search was ongoing for "a quantity of explosives placed in another car."

LBCI television said the army was inspecting cars parked near "a building owned by the detainee Mohammed al-Ahmed."

Palestinians & Syrians were involved I bet .
Get rid of them !
Clean our country from filth that everyone is dumping in our Holy Cedar Land !
As for us we then can sort things out between ourselves regardless of sects .
Signed Wolf .

there is nothing 'holy' religion is a fiction, wake up, stop hating people who have the same dna as you.

Wolf how old r u? 3? If not then u have the mental age of a 3 year old! 3eefna with your Lebanese superiority complex. Filth is filth no matter what nationality and remember in lebanon we have a lot of Lebanese filth so grow up.

There is a big difference between somebody's own filth and being subjected to somebody's else' filth. Nobody should be subjected to deal with and clean somebody else' filth because that person has his/her own filth to worry about, deal with and clean. I may or may not have the time, energy, resources and the means to maintain my own cleanliness and put it under control so that it does not infect and control my body. It would be very "nice" to be able to target and surgically remove cancer cells infecting one's body, but the truth is in order to poison and kill the cancer, unfortunately, good cells must also be effected. Any country that has foreigners killing its citizens and infecting the country, inherently, they have the absolute right to reject and oust the entire group both good and bad and revisit the issue to allow them in once again in the future under more controlled circumstanced. My body, here my country, is holly and I like to keep it that way.

Wolf, grow up. Lebanese have plenty of terrorists and trouble makers so when you place your bet, make sure to include lebanese. After all, the only non-saudi 9/ hijacker was lebanese. Then we can sort out things? Those who have your mentality will NEVER be able to sort out anything as it is that mentality that lead to civil war. Dont forget your previous posts where you posted secterian comments against sunnis not long ago. Your solution is to hate syrians and palestinians. The unity factor in your mentality is always to hate, if not lebanese sunnis, then syrians and palestinians, or arabs or the armenians or and or and or. Its always hate that filth like you want to use to unite lebanese or part of the lebanese and everytime it fails and no real unity is achieved and do you know why? Its because a foundation based on hate can never achieve unity in areas where it counts. It only unites the habeyel for a limited time and only in that specific area - hate.

If this guys "wolf" is a bigot, then that is a different story, but the issue regarding infiltration of foreign interest infecting one's home and country must be discussed and dealt with separately since these are type of threats that concern every citizen wither good or bad.

What you say is true. All these so called politicians have connections with foreign interests, but a country, including Lebanon has the fundamental right to keep foreigners undermining national interests and who do not have good intentions outside. If this guy "wolf" is a bigot and living some place like the U.S. and away from Lebanese communities, then he has a clear idea what it means to be Lebanese. If he is in Lebanon, I am sure he has friends and relatives living abroad with a bad wrap fairly or unfairly.

To the Army always but never to terrorist khizbollah

Yes exactly!!! Listen to your own advice!!! Think in Lebanon Only!!! Bring this "resistance" back to "in Lebanon Only"!!! Do that and then, and only then, can we as Lebanese Unite. As long as anyone of us is fighting it out in Syria, the situation will only get worse.

ttu
This is BS crap you have picked up from your BS politicians.

Bring HA back to Lebanon, and then we will all live in peace? hahahaha, which planet do you live on?

If HA surrenders its weapons, then we will all live in peace? hahaha you have a low iq

We are the resistance!!! We're resisting the Terrorists aka Hezb Ebola, Qaida, Nousra and the others...

Ya khafeef, the people who did this in Dahye were terrorists dealing with other terrorists.

Our mission is to stop both...

This gang belongs to which group? of the various groups acting on Lebanese soil.Why not say it openly so that everyone knows

Lebanon has way too many refugee, even if they were all angles. If Lebanon was to have its fair share of refugees on humanitarian basis, the total number of Palestinian and Syrian refugees should not exceed 200,000. We need tighter controls and expulsion of all the trouble makers amongst the refugees........ zero tolerance policy (also why stop with refugees, expel all Military advisers to armed militias ...... whether they are Iranians or otherwise). Make Lebanon safe for its citizens.