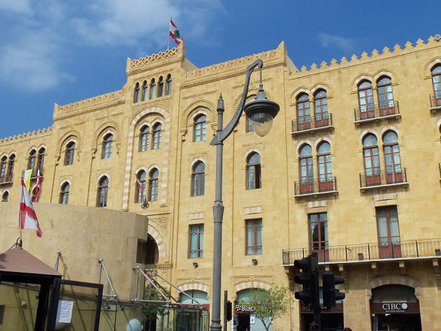 The Beirut Municipality on Thursday decided to install CCTV security cameras across the capital due to the "extraordinary" security situation and to stage joint patrols with the Internal Security Forces.

"Given that security in the capital is a red line and that the national duty requires taking extraordinary measures to boost citizens' confidence in the security situation, we have decided to install a network of cameras that would cover Beirut's streets and which would be linked to a modern control room," Beirut Municipality chief Bilal Hamad said at a press conference following an emergency meeting for the municipal council.

Hamad asked the council to take the measures necessary to implement the resolution as soon as possible in coordination with the municipal chief.

And in what he called “an act of solidarity with the Lebanese who suffered major damages from the vicious bombings in the Rweiss area and at Tripoli's al-Taqwa Mosque and el-Mina's al-Salam Mosque,” Hamad said the municipality has decided to “donate 250 million Lebanese pounds to the municipalities of Haret Hreik, el-Mina and Tripoli in compensations for those affected and to express the support of Beirut's residents for their people in Rweiss, el-Mina and Tripoli.”

In addition, the Beirut Municipality decided to “activate the role of Municipal Guard in the city through staging foot and mechanized patrols in full coordination with the Internal Security Forces, and to reaffirm the previous municipal decision by asking the board to devise an integrated plan to boost the capabilities and equipment of the Municipal Guard.”

The measures come in the wake of twin bombings that targeted the al-Salam and al-Taqwa mosques in Tripoli on Friday and left 45 people dead and more than 800 injured.

The bomb attacks followed two blasts that rocked Beirut's southern suburbs, the last of which was the Aug. 15 Rweiss bombing, which left 27 people dead and more than 280 wounded.

The series of bombings sparked panic across the country, with citizens reporting the presence of suspicious cars in their neighborhoods everyday.

There is, however, a difference between deciding on a certain initiative and actually receiving the approval from the government to implement such things.

Wow. Someone is actually doing something? I hope these measures cover all crimes, not just terrorism.