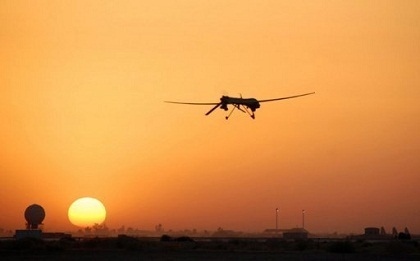 U.S. missiles on Friday killed a commander in the Al-Qaida-linked Haqqani network involved in the abduction of U.S. soldier Bowe Bergdahl, Pakistanis said.

Mullah Sangeen Zadran, blacklisted as a terrorist by the United Nations and United States, was among six fighters killed in a drone strike in Pakistan's tribal district of North Waziristan.

The United States has blamed the Haqqani network, a faction of the Taliban waging a 12-year insurgency in Afghanistan, for a series of high-profile attacks in recent years.

Two announcements made by mosque loudspeaker in Miranshah, the main town in North Waziristan, said Zadran's funeral would take place at 3pm on Friday, witnesses said.

Two Pakistani intelligence officials, who spoke to AFP on condition of anonymity, confirmed his death and said an Arab fighter was also among the dead.

In August 2011, the U.S. State Department said Zadran was believed to have orchestrated the kidnappings of Afghans and foreigners in the border region between Afghanistan and Pakistan.

Earlier that year, he was identified by the SITE monitoring group as the militant who blindfolded and led away U.S. soldier Bowe Bergdahl on a video filmed of his captivity.

Bergdahl disappeared on June 30, 2009 from his base in Paktika. He is the only known American soldier held by Afghan insurgents, who have released several videos showing him to be alive.

A source close to the Afghan Taliban in northwestern Pakistan told AFP on condition of anonymity on Friday that Zadran had been involved in the abduction of the soldier.

The Taliban on June 18 opened an office in the Gulf state of Qatar, reviving hopes in the United States that contacts might resume on a prisoner exchange that would bring Bergdahl home.

The U.S. State Department says his release is a priority.

Bergdahl has said in a video that he was captured when he fell behind his unit during a patrol.

The U.S. State Department said Zadran was shadow governor of Paktika, a volatile Afghan province on the Pakistani border, and a lieutenant of Haqqani leader Sirajuddin Haqqani.

It said Zadran led fighters in attacks across southeastern Afghanistan, and was believed to have planned and coordinated the movement of hundreds of foreign fighters into Afghanistan.

The Pakistani government formally protests against U.S. drone strikes as a violation of sovereignty, but Washington views them as a vital tool in the fight against Al-Qaida and the Taliban.

On a visit to Islamabad last month, U.S. Secretary of State John Kerry suggested that drone strikes in Pakistan could end "very soon" as the threat of militancy recedes.

There has been a steady decline in the number of U.S. drone strikes reported in Pakistan in recent years.

According to an AFP tally there were 101 attacks in 2010, killing more than 670 people, compared to just 18 so far this year killing just over 100 people.