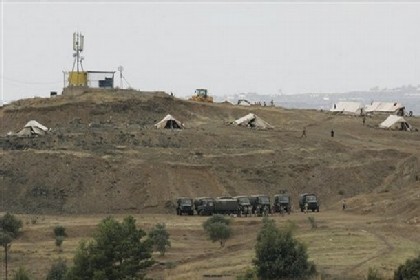 Shells fired from the Syrian side of the border fell on the outskirts of the Akkar towns of al-Noura and al-Dabbabiyeh on Friday, prompting residents to flee the area en masse, state-run National News Agency reported.

“A state of fear and anxiety is engulfing these border towns and some residents have fled to safer places,” NNA said.

“A major gunbattle involving the use of all sorts of heavy weapons is currently taking place near the Grand River,” the agency added.

Earlier, it said fierce bombardment was targeting the Syrian town of al-Zara "from positions near the Lebanese border at a rate of two shells per minute."

Later on Friday, NNA said three shells and heavy machinegun fire targeted the outskirts of Fraydees and al-Dabbabiyeh on the Lebanese bank of the Grand River.

It added that gunshots were being fired at the cars crossing the Abboudiyeh-Minjez highway.

Where is the glorious and holy resistance?...... Using baillonettes against innocent civilians in Lebanon and Syria.

they cannot protect people from akkar as they are not chias...thus all terrorists! LOL

I know it's lol.... But this ongoing mascarade is a HUGE problem for our safety.

sure! let s use M8 logic: they support the shelling of lebanon by syria because they pretend that terrorists hide in villages...they are right to do it even if it means scaring people making them flee from their homes or hurt them...
israel had the same logic as syria and bombed lebanese villages because they pretended that terrorists were hiding too but they are enemies but syria is a friendly state! LOL go figure their twisted logic!!!

his FM or his Syrian Embassador?

oh! no M8ers to denounce this? strange.... but they bark when it comes to defend hezbis or bashar... LOL!

mansour is probably having arghele and coffee with the syrian ambassador--of course, nothing of this came up...